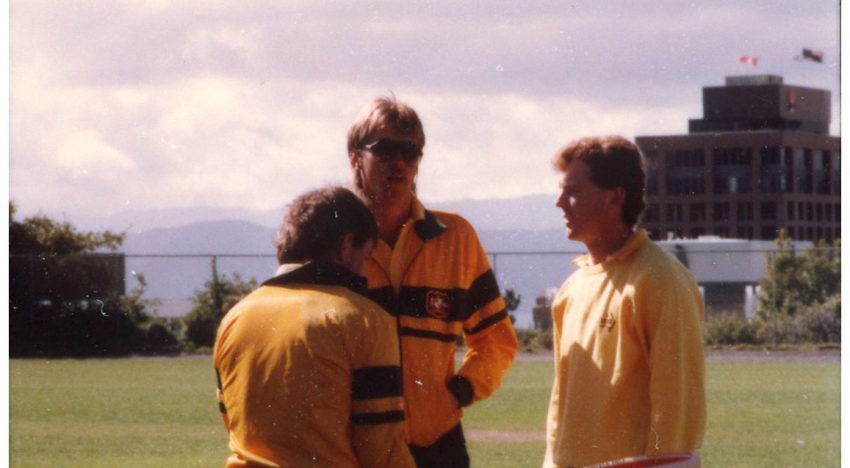 Australian cricket is one of the main players on the world stage within the game and with good reason. From the Dennis Lillee years of the 1970’s to the Shane Warne heroics of the 1990’s, they have always turned out fantastic teams and brilliant players. For the first part of the 1980’s though this was not the case. With the core of the feared 1970’s team retiring and the new players to replace them not coming through, the first half of the decade saw them struggle. By the time the 1980’s had finished though, they had pulled themselves back towards the top thanks to grit, hard work and skill.

Here are ten of the greatest Aussie players from that decade who made it happen:

In many ways, Craig McDermott had all it took to make it higher up our list as a real legend, if injuries had not ravaged his career. After bursting onto the scene in 1985 as a young man, when he took 30 wickets in 6 Tests against England, health problems interrupted what looked like a stellar career ahead. A twisted bowel and broken ankle (amongst other things) were afflictions he suffered, which kept him out of the game for long periods.

When fit, though, McDermott was a brilliant bowler for his country. A textbook swing bowler with a solid side-on action. His best delivery was a superb outswinger which got him many a wicket in the international arena. Although he made his debut in the 1980’s and played throughout the decade, he came into his own more in the 1990’s when he was fully fit.

His best spell in this decade was a mesmerising 8 for 141 against England in 1985 where he swung the ball to great effect. In all he played 71 Tests and took 291 wickets which is a fine record to finish with.

If there is one name that tends to crop up on a few of these types of lists for Aussie players it’s this guy. Making his debut in 1985, Steve Waugh played right through until 2004 and was such a vital player during that time that he deserves a mention. A great batsman and useful medium-pace bowler, he was the very embodiment of Australian grit and determination. These great personal qualities added to his natural cricket skills made him one hell of a player. Eventually rising to captain his country, he led them to the 1999 World Cup as well as 15 of their 16 record consecutive Test victories.

In the 1980’s, however, he entered international cricket in the middle of the decade as a raw 20-year old. It must be noted that for the first few years he was finding his feet somewhat and settling into the international scene. He still showed plenty of skill though and marked himself as one to watch as he matured. Upon retiring he had played 168 Tests and made 10,927 runs to cement his place as a legend.

Coming in at number eight on our list, Greg Ritchie was a fine middle-order batsman for Australia who made his debut in 1982. Although he only played for his country until 1987, he was a very good player none the less. Indeed, it is suspected that it was his less than stellar performances in the field under the captaincy of Allan Border that ultimately lost him his place, not his batting. It must be said though that, after making a century in just his second game, he never reached his potential and remained something of an unfulfilled prospect.

A well-built player, Ritchie had plenty of power but also skill when at the crease. He could be very elegant at times in his stroke-play and had a brilliant straight drive that he employed on many occasions. Even when he lost his test spot, he continued to score heavily for Queensland which confirmed his skill. His finest performances were a superb 146 against England in 1985 and a classy 128 against India in the same year.

Nicknamed ‘Mocca’, Carl Rackemann was as unlikely an international athlete as you would ever see. Burly and balding, he didn’t exactly cut the type of figure that screamed of long hours in the gym. He was, however, a great fast bowler and performed admirably for Australia from 1982 to 1991, which qualifies him for our list. As with some other Aussie cricketers during this decade his international career was curtailed somewhat by injury and also a decision to play on the rebel tour to South Africa.

Rackemann’s main asset was his pace which he used to superb effect to bag his wickets. As with most Australian players, he had a superb mental attitude and will-to-win that drove him to high standards of performance. A barnstorming 6 for 86 against Pakistan in 1983 was his best spell; he simply destroyed the Pakistani batting line-up. In all he played just 12 Tests but took 39 wickets in them to show what talent he had. In some ways, it is a shame he did not play more than those 12 Tests as he would no doubt have gone on to take even more scalps than he did.

If there was one player who always looked like he was enjoying his cricket, it was Terry Alderman. Invariably found with a smile on his face, he was a medium-fast bowler who could use his talent to trouble even the best batsmen. Indeed, in 1989 he reduced Graham Gooch to such a state that he asked to be left out of the English team!

Alderman’s main weapons were his beautiful off-cutters and away swingers that bamboozled many a batsman in his time. He also had a great line and length which he hit consistently which, combined with his other skills, made him a great bowler. He would have been considered in even higher regard but for two long spells out of the international scene. One was through injury after tackling a pitch invader in 1982/83 and then another after joining a rebel tour to South Africa.

Overall, he played 41 Tests and took 170 wickets to leave him with a very respectable average of 27.15. With his nagging movement and accuracy, he would have been very handy to his country in the 1985 Ashes series!

There was a period from the early to mid-Eighties when Australian cricket was in the doldrums somewhat. During that time one player shone as a beacon of light to fans and that was Greg Matthews. His brash, effervescent character and dashing, cavalier style of play endeared him to many fans looking for something to cling onto.

Primarily an off-spinner, Matthews had a dogged determination and never-say-die spirit that made him a valuable player for his team. Not a great turner of the ball, he relied instead on wearing the batsman down and luring a false shot to get his wickets. Indeed, his real worth at the peak of his popularity was with the bat. A courageous and crowd-pleasing style saw the Aussie fans take him to their hearts as he produced some fine innings. His very best was a dashing 130 in 1986 against New Zealand which showcased his powerful style.

It was in 1986 when he turned in his best bowling figures also, taking 5 for 103 against India. Unfortunately for Matthews, he was not as popular with team-mates or captain Allan Border as he was with the public. This ultimately led him to play less games than he might have.

A natural showman who knew just what the watching cricket fans wanted in a player, Dean Jones was a hugely popular figure. Always attacking, he was a brilliant batsman for Australia and in some ways a forerunner to the modern One Day player. He would go after fast bowlers, run frenetically between wickets and embrace his fielding duties with unrivalled gusto. All these talents allied with his fighting spirit made him a great fit for the new Australian team that Allan Border was putting together as the decade wore on.

It should not be forgotten that Jones was also a great batsman in the classic sense with great footwork and a solid technique. Playing 52 Tests, he made 3,631 runs in all which shows how valuable he was to his country. A smashing 216 against the West Indies in 1989 was the perfect demonstration of his batting abilities.

Arguably Tasmania’s favourite cricketing son, David Boon was a powerful hitter and stubborn player with an iron will to win. His trademark shots were explosive square cuts, pulls and drives which he used to amass many runs for Australia during his career. Although not the most elegant player, he more than made up for that with the runs he scored and his ability to stay at the crease for long periods and construct important innings.

Importantly, Boon was a key figure in the Aussie team that finally came back to life in the latter part of the decade under Allan Border. His intensity and fierce character rubbed off on the other players around him and made them better as a result. A double century in 1989 against New Zealand showed just what he was capable of against even the best bowlers. Overall, he played 107 Tests and made 7,422 to finish as one of his country’s best loved sportsmen.

Entering the international stage in the mid-Eighties, Merv Hughes was a firm crowd favourite by the time he finished. A lively character, his sense of fun and showmanship meant he always entertained. It should not be forgotten, though, that he was also a fine bowler! Able to operate as a stock bowler or as spearhead of the attack, he had a distinctive run-up as well as a classic fast bowler’s action.

Hughes’ great attribute with ball in hand was aggression and pace. He could get a good amount of bounce and movement off the pitch also to make him a real handful for any batsmen. He was another player, like Boon, who helped Australia climb back up the rankings in the late 1980’s after a period in the doldrums.

A storming 8 for 87 against the West Indies in 1988 saw Hughes rip through the opposition batting order like they weren’t there! Playing 53 Tests by the time he retired, he bagged 232 wickets to tell his grandchildren about. We haven’t even mentioned that moustache yet either!

Australian cricket in the 1980’s was all about one man – AB! He was the player who stepped up to the plate when his country was in trouble and rescued them. Stepping into the breach after Kim Hughes resignation, he evolved into the ultimate skipper. Like a modern-day Moses, he led the baggy greens to the promised land of increased rankings and victories. Leading through sheer willpower and force of personality, he also had a sharp cricketing brain when out in the field.

As a player, Border was brilliant with the bat and in the field. Not noted for his elegant stroke-play, he instead relied on occupation of the crease and building an innings up through gradual run accumulation. This refusal to give his wicket away led him to score many big innings and make stacks of runs for his country. He was particularly talented off the back foot, easily hooking or pulling any short balls that were sent down to him.

As we have already noted, Australian cricket was not in a good place for the first part of the 1980’s. Although they had some fine players during that period, it wasn’t until Allan Border made them a real team when he became captain that they flourished. Once this happened, their dominance continued for many years, but it can all be traced back to this decade.