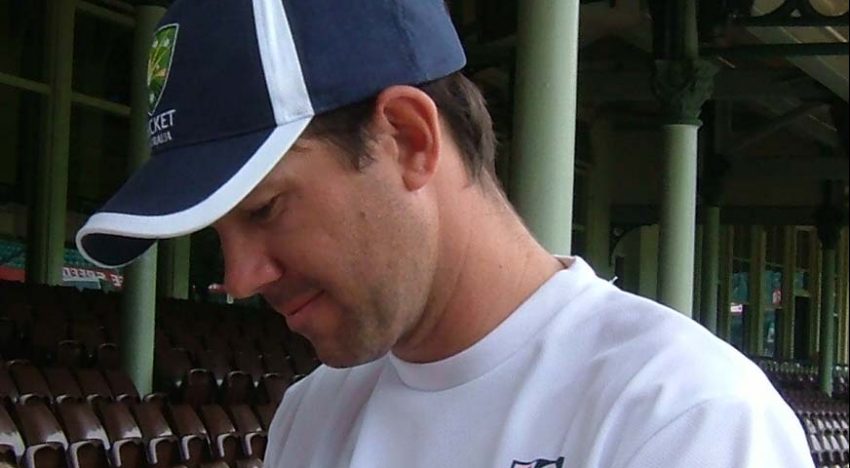 The title of Australia’s best ever batsmen is surely a settled debate, as it is highly unlikely one would ever come close to the great Sir Donald Bradman, who has for close to seven decades been unchallenged as cricket’s greatest player. When there is a debate about Australia’s second finest batsman, though, the name Ricky Thomas Ponting surely comes into the reckoning. One of the most aggressive batsmen that the game has witnessed, Ponting was a class apart from most of his contemporaries. The mark of his greatness can be understood by the fact that despite being part of a champion squad he was still the most prized Australian wicket for much of his career. Ponting broke many records and celebrated more victories than any other Test cricketer in history; he is rightly considered one of the all-time greats of the game.

Statistically, ‘Punter’, as he was called, is Australia’s most successful batsmen. He scored 13,378 runs in 168 matches, which leaves him behind only Sachin Tendulkar in the history of the game, and his 41 hundreds put him third on the list of top century makers. He scored runs all around the world and is one of the few batsmen who scored hundreds against every other Test playing nation in his era. He is also Australia’s most successful captain, having won 48 out of 77 Test Matches at an incredible 62.33% winning percentage, and one of the game’s greatest fielders. But it was Ricky Ponting the batsman who instilled fear in the minds of opposition captains. Here we turn back the clock and take a look at ten of his best test match knocks.

The list of batting legends who announced themselves on big stage by scoring a Test hundred on debut is illustrious. Ponting narrowly missed out, falling 4 short of what would have been a prized jewel in his otherwise remarkable cricketing crown. But Ponting had few reasons to complain since he narrowly escaped a golden duck! Sri Lanka’s first slip missed a tough catch when Ponting stepped out to Muttiah Muralitharan on his very first ball. History could have been oh so different! Nevertheless, Ponting played a patient knock (after the initial burst of nerves) and stroked his way to a delightful 96 before being trapped by Chaminda Vaas. Australia won the game by an innings and 36 runs and Punter would have cherished being on the victorious side in his Test debut.

The first test hundred is always special for a cricketer, even for a man who would score 40 more of them in his career. And when it comes to Australians, they cherish nothing more than an Ashes ton and especially in the arch rival’s backyard. On his first Ashes tour to England, Ponting had to watch the team from the dressing room in the first three Tests. When he got his chance in the 4th Test Match at Leeds, he made most of it scoring 127 in the first innings. He took guard when his team was struggling at 50 for 4 and together with Mark Elliot put up 268 for the 5th wicket helping his side amass 501 against England’s score of 172. The Aussies went on to win the game by an innings and 61 runs.

If there is one word that best describes this knock it has to be ‘clinical’. The West Indies didn’t have the most threatening attack in the world, but you don’t walk in and score double hundred against any attack casually. Batting at No. 3, Ponting played a chanceless knock as he brought up his double hundred during his 8 hour stay at the crease. The way he compiled his runs, playing all around the ground, is what stood out in that knock. There wasn’t much the West Indian skipper Brian Lara could ask his bowlers to do, as Ponting was in sublime form offering little for the bowlers to exploit in what was a batting friendly wicket. This innings helped his side win the Test Match by 188 runs.

A great batsman can often be judged by his performances in the 4th innings of a Test match when batting conditions are the toughest. The character that Ponting was, he often played brilliant knocks towards the end of a test, much to the admiration of his fans. This innings of an unbeaten 100 was a special one as it helped his side win a Test match in which few would have expected them to emerge victorious. Set a target of 334 to chase, against one of the best attacks in the world, Ponting played a typically stoic knock giving nothing away to the bowlers. At one stage Australia looked in trouble at the loss of the 5th wicket, but Ponting held his ground at one end and ensured that the team crossed the finishing line without any major hiccups.

There is nothing as celebrated as a 4th innings hundred and when it comes at the back of a hundred in the first innings it is considered the ultimate batting performance. Ricky Ponting is one of the three players in the history of the game to have done it thrice. And this performance was surely one of his best. South Africa, batting first, declared at 451. Ponting’s 120 ensured that the home side made 359 and avoided a huge deficit, which looked certain at one stage. Set a target of 287 to win the game, which seemed tough at the start of Australia’s second innings, Ponting played one of the most remarkable knocks of his career scoring at a strike rate of nearly 90 to help his side win the game by 8 wickets. The merciless manner in which the Australian skipper destroyed the attack on a 5th Day pitch was one of the best sights the game has seen in the recent years.

This was one Test match that showed the grit and determination of Ricky Ponting the batsman as well as the skipper. Bangladesh nearly pulled off the unthinkable act of defeating the mighty Australians at home. In the first innings, Australia conceded a lead of 158 runs to the home side, which few would have expected at the start of the Test Match. Chasing a stiff total of 307 to save their reputation, the Australians kept losing wickets at regular intervals and were reduced to 225 for 5 on a testing 5th day wicket that offered turn and bounce to the home side. Ponting, though, played a captain’s knock controlling the game with the lower order and remaining unbeaten on 118 after over 6 hours played in testing conditions. This 4th innings hundred would have given him immense pleasure given the stakes of losing a game against a side considered minnows in that era.

Before the start of the Border-Gavaskar Trophy in 2011-12, pundits were raising questions about Ponting’s form and place in the side. He had gone without scoring a hundred for almost two years and failed to capitalise on the starts he had gotten in the preceding games. Ponting would have fancied his chances going into the series, having had a great record against the Indians. In the 2nd Test Match at Sydney, he relieved the pressure by bringing up his 40th career hundred. But Ponting kept the best for Adelaide, one of his favourite hunting grounds. Scoring his sixth double hundred, he dominated the Indian attack and was involved in a huge 4th wicket partnership of 386 with Michael Clarke, which remains a record against Indians. Australia won by a massive 298 runs thanks to Ponting’s memorable performance, which contained the final century in his illustrious career.

For Ponting, who has been a part of the winning side in 108 test matches (the highest in the history of the game), there were relatively few occasions in his career where he had to fight it out to save a game. In arguably the best Ashes series in decades, he broke the heart of many English fans with what is rated as one of the best knocks of his career and one of the best match saving efforts in test history. The equation was simple: England set a target of 422 and had 4 sessions to press for a win. Coming into bat at 25 for 1, Ponting played superbly, rallying the rest of his batsmen to deny England a win. At 183 for 5, English fans would have smelled a victory, but Punter held his ground and played a classy knock of 156 to prevent England from taking a lead in the series.

There have been only four instances of Ponting scoring a hundred and Australia losing a Test Match and this happened only twice at home. There can perhaps be no better testimony to Ponting’s contribution to the side during his career. If there is one knock where he deserved to be on the winning side, it was this one. Coming into bat at 22 for 1, Ponting toyed with the Indian attack, cutting and pulling boundaries at will, and set up small partnerships with others despite seeing the fall of wickets at the other hand. He batted cleverly with the tail and was eventually the eighth man out taking team total to 556. Despite this effort, the Aussies lost the match to India after Rahul Dravid played arguably the finest knock of his career, scoring 233. This is still only the 16th instance in the history of the game where a player scoring a double hundred ended up on the losing side.

For most of Ponting’s career the Australian team carried the ‘invincible’ tag and rarely did one find the side going into a Boxing Day Test Match at the MCG being one down in the series. In one of the first competitive tours Down Under in years, Australia were trailing India 0-1 going into the 3rd Test Match of the Border Gavaskar Trophy in 2003. Putting the disappointment of the Adelaide loss (above) behind him, Ponting started again from where he had left off. He wasn’t going to let the fans down, as he brought up his highest ever Test score, playing an incredible knock of 257 and helping his side take a lead of 192 runs. During his 10 hour stay at the crease, Ponting took Indian attack apart, hitting them to all parts of the park and dishing out extra punishment for legendary spinner Anil Kumble. This magnificent knock helped Australia win the game by 9 wickets and ultimately prevented the Aussies from losing a crucial home series.