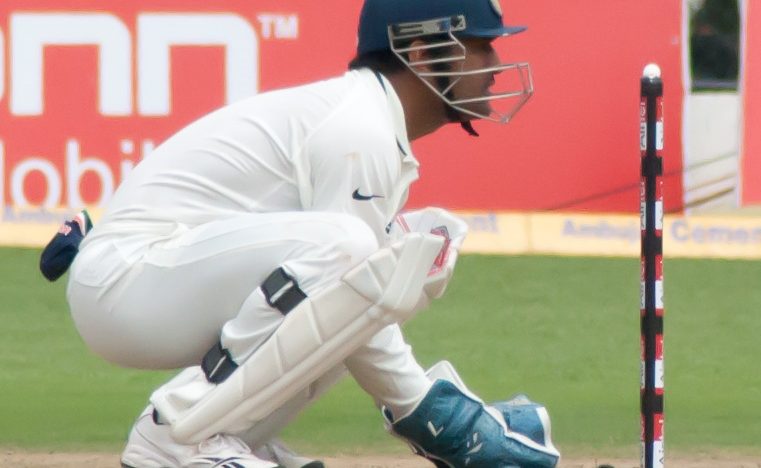 The man with the best view, the man who murmurs and chatters too often to intimidate batsmen, wicket-keepers have a very important role. There is no other player in the team who is involved in every delivery when on the field. Sadly, wicket-keeping is the most underrated art in the game of cricket. Like batsmen and bowlers, keepers, too, need to adjust to the conditions. And when keeping to spinners on the hard and bouncy tracks of the subcontinent, they can’t be short on their skills.

India has had a long list of wicketkeepers who have impressed with their skills and earned many fans around the world. Here we take a look at 10 greatest wicket-keepers who have represented India at the highest level.

Not a man to be No. 10 in any list, Rahul Dravid did a splendid job behind the stumps when he took up this ‘not-so-natural’ role as a challenge. As vice-captain of the team, he stepped into the wicket-keeping job on the advice of his captain Sourav Ganguly. One of the finest batsmen to have ever played the game, Dravid is fourth on the list of Indian keepers with the highest dismissals in ODI cricket. Though he never kept for India in Test Cricket, he had 84 dismissals to his credit in 73 ODI matches when he wore the big gloves. And this came along with the immense contribution that he had with the bat.

Dinesh Karthik’s first effort behind the stumps to dismiss Michael Vaughan could easily be among the top 5 stumpings in ODI cricket history. A stylish keeper, Karthik would have played extensively for India in any other era – had he not been playing at the same time as the great MS Dhoni. Karthik is a textbook keeper, always staying low with fingers pointing towards the ground. Whenever an opportunity has come his way in the last decade he has grabbed it with both hands. He has more than 100 dismissals to his credit in International cricket and is still going strong at the domestic level to earn his place in the Indian team. More than 400 dismissals and 9,000 runs in First Class cricket speak volumes about his all-round abilities.

For most of his career, Wriddhiman Saha remained in the shadows of MS Dhoni, but impressed one and all whenever he got an opportunity to represent his country. Post Dhoni’s retirement from the longer version of the game, Saha has become an integral part of the Test team and has made a great contribution. He has not only kept well to Ravichandran Ashwin and Ravindra Jadeja, but has also scored three test hundreds and a number of fifties lower down the order. Saha is natural and athletic as a keeper, which has given him the edge over some very talented rivals. He is constantly improving and has earned praise wherever he has played in the world.

When Partiv Patel made his debut as a 17 year old in England, the chubby faced youngster seemed more like a 14 year old school kid. While he showed spark in the tour of England and Australia in that season, his occasionally sloppy work cost him his place in the team. Partiv worked hard on his keeping and has scored prolifically in all formats of the game in the domestic tournaments. Much of his career has coincided with that of Mahendra Singh Dhoni and this has denied Partiv the chance to represent India at the highest level as much as he would have liked. Still, he has more than 100 dismissals to his credit in all formats of the game at international level. His true prowess, though, is more apparent at First Class level, where he has accumulated close to 10,000 runs at and claimed over 550 dismissals.

Vijay Merchant considered him to be as safe as the ‘Bank of England’ behind the stumps, while Aussie wicketkeeper Wally Grout compared him to Don Tallon, who was a member of Bradman’s Invincibles. There wasn’t anything flamboyant or spectacular about Narendra Shankar Tamhane, but he was a textbook wicket-keeper who always did his job behind the stumps in a no-nonsense manner. Keeping on bouncy tracks in the sub-continent was no mean task when one considers that he kept to the likes of Ghulam Ahmed, Subhash Gupte and Vinoo Mankad. In 21 Test Matches for India, Naren secured 51 dismissals and was a stubborn batsman in the lower order.

For days Farokh Engineer would bend his back and keep to the legendary Indian spin quartet of Erapalli Prasanna, Srinivas Venkataraghavan, Bhagwat Chandrasekhar and Bishen Singh Bedi. How about that for a CV? As stylish and flamboyant as Engineer was in his mannerism off the field, he was equally elegant on the park behind the wickets. For a man who was strongly built, Engineer possessed superb reflexes. Sunil Gavaskar once said Farokh was a ‘joke-a-minute’ man who would always boost the morale of the team. He was the first-choice wicketkeeper for Rest of the World XI and had over 80 dismissals to his credit. Also handy with the bat he notched 2,611 runs with two tons in the 46 Test Matches that he played for his country.

A little man with a big heart, Kiran More always relished tough challenges throughout his career. Whether it was unnerving the batsmen with his constant chatter behind the wicket or facing the fastest bowlers in the world with all his grit, More was a player who always put his hand up for tough assignments. Post Sayed Kirmani’s retirement, More became a regular part of the Indian team and kept to the likes of Anil Kumble and Narendra Hirwani on square turners in India. In close to 150 international matches that he played for India, Kiran More produced more than 200 dismissals. No mug with the bat, he also often put up stiff resistance in the lower order.

At his peak Nayan Mongia was widely rated as the top wicket-keeper in the world. Taking over the mantle of keeping from Kiran More, Mongia impressed one and all behind the stumps from his early days. He caught the attention of the legendary Alan Knott on his first overseas tour, garnering extensive praise from the English legend – something would make any wicketkeeper proud. Mongia was the mainstay of the Indian team in both formats of the game for almost a decade. A natural keeper in every aspect, he kept well to both spin and pace and made keeping to Anil Kumble look easy. Mongia was a decent man with the bat lower down the order and also opened for the team in test matches occasionally. He has more than 250 dismissals to his credit at the top level and also scored more than 2,500 runs in Tests and ODIs.

Before MS Dhoni rewrote most of the records for the Indian team, Sayed Kirmani was the best wicket-keeper India ever had. For a decade he was India’s best man behind the stumps, keeping equally well to the Indian spin quartet on turning tracks as he did to Kapil Dev and the battery of medium pacers in seaming and swinging conditions abroad. Legend has it that he didn’t let a bye slip past in three consecutive tests and this is perhaps the best testimony to his skills as a wicketkeeper. A part of the 1983 World Cup winning squad, Kirmani was also a stubborn batsman down the order who scored two test hundreds. He has more than 200 dismissals to his credit at the international level and scored more than 3,000 runs.

Mahendra Singh Dhoni is the best glove man that India has ever had and arguably among the best to have ever played the game. While a lot is said and written about his leadership, he remains a thorough professional in the art of keeping and makes it look simple. There were question marks over his technique in the early years, but Dhoni surprised many with his composure and skill behind the stumps. Though he isn’t a stylish keeper, he compensated for the lack of flamboyance with his unerring consistency. A street smart cricketer, Dhoni has often foxed the opposition with his unconventional methods such as one glove keeping. He has more than 700 dismissals to his credit at the top level and over 15,000 runs in a career that is still going strong.