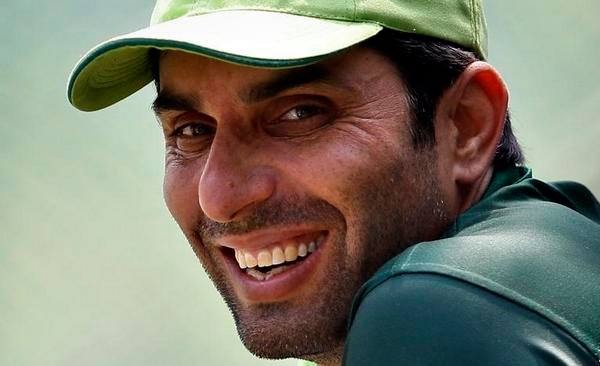 Pakistan cricket has always been full of exciting players who mix spirit, pride and talent together into a potent brew. The years 2000-2010 were no different for the country and this decade saw many players make their entry into international cricket and make their mark. Some were devastating batters who could pile on the runs, while others were wily bowlers who could snatch away wickets quickly. Whatever specific discipline they thrived in though, they all had one thing in common – sheer brilliance!

We look at ten of the best to have played for Pakistan in that decade:

The first name on our list is the left-handed opening batsman from Lahore, Taufeeq Umar. Unusually for a Pakistani opener, he had great focus and mental strength which enabled him to be build many innings for his country rather than getting out cheaply. A fine player on the front foot, his great timing made him able to play seam bowling particularly well. Naturally talented with the bat, he had a superb pull shot along with fine drives either side of the wicket.

A regular in the Pakistani Test team when playing internationally, his best innings during the decade was a blistering 135 against South Africa in 2003, although a storming 111 against Zimbabwe in 2002 was another highlight. In all he played 43 Tests and notched up 2,943 runs in that time at a 38.72 average. These stats show just how good a player he was, certainly in a position in the order that Pakistan always struggled to fill.

Abdul Razzaq just sneaks onto our list – although his Test debut was in 1999 he played through most of the 2000 to 2010 years for his country so deserves a place. Primarily he was a bowler but he was also pretty useful at the crease for his country too. He once did take two hours to score four runs against Australia though although it is presumed this was a tactical decision!

With the ball in hand he was pretty quick and also possessed fine accuracy, consistently placing the cherry in areas that would trouble the batsman. Razzaq could also put some reverse-swing into his deliveries which was another major weapon in his arsenal. Characterised by a galloping approach, his best figures were the 5 for 35 he took against Sri Lanka in 2004.

As an all-rounder, he was also good with the willow, particularly when toward the lower end of the order. Possessing a superb array of shots, he could hit through cover and mid-off easily off either foot. A naturally attacking player, he did tend to get bogged down and give his wicket away if the other team could cut his runs off. His smashing 134 against Bangladesh in 2002 saw him deploy his full range of strokes to devastating effect.

Next on our list of top Pakistan players in the 2000s is Adbur Rehman. A slow left-arm orthodox bowler, he didn’t make his Test bow until the ripe old age of 26 but turned out to be a good player for his country over the years. Not blessed with amazing turn, he instead relied on accuracy and a great length to get his wickets. He was also brilliant at restricting the runs on offer to batsmen who would then get out playing daft shots out of frustration. Rehman also had a great knack for putting the ball into any rough patches on the pitch to help him out.

In all, he played 22 Tests and took 99 wickets which is a very respectable haul in anyone’s book. In the years we are looking at, his best spell was 4 for 105 against South Africa in 2007. Overall, he was a great player for his country especially if the run rate needed bringing down.

In some ways, you have to feel sorry for Shoaib Malik – a batting all-rounder, his competence in most of the roles within the team meant he never quite found a settled position to call his own. Equally good opening the innings up, batting defensively to shore it up in the middle order or hitting out when runs were needed quickly, this flexibility was in some ways to his detriment.

As a player, though, he certainly possessed more than enough talent to be a regular part of the international set-up for Pakistan. As a batter, he was more functional than expansive – his checked drives and careful forward defensive strokes highlighted this to great effect. His technique was rock solid though and his slogs through mid-wicket were always worth a few runs. Not quite as effective when bowling, his flattish off-spin was none the less useful at times for his country when they needed a few overs or wickets from someone.

Probably his best match for the Men in Green was a 148 not out against Sri Lanka in 2006 that saw him play with a more attacking bent to go with his natural defensive instincts.

A late bloomer when it came to international cricket, this player was an unflappable character who was just the sort of player Pakistan needed a lot of the time. His remarkable composure and fabulous technique mean that he could occupy the crease for extended periods of time. Happy either defending steadily or improvising shots to annoy bowlers, he can also hit out when called upon.

After making his debut in 2001, he went on to play 75 Tests and score 5,222 runs at a 46.62 average which makes for fine reading. His 161 against India in 2007 was a fine example of his calm approach and ability to score runs when the chance was there.

This may be somewhat of a controversial inclusion due to this player’s implication and subsequent imprisonment for match-fixing in 2010. If we are talking about him purely in cricket terms, though, and his talents on the pitch, then he certainly deserves a mention.

Up to the point it all fell apart for him, Butt was looking all set for a glittering career and many had compared him to the legendary Saeed Anwar. Left-handed and the owner of a pair of very supple wrists, he had a natural confidence that allowed to flourish in the international side. A great puller of the ball, he would get right up on his toes to whip the ball round for runs. Butt also scored many runs in the area between extra cover and backward point where he could flick or scoop the ball effectively.

In total, he played 33 Tests and made 1,889 runs at a 30.46 average. It is highly reasonable to assume he would have gone on to play many more games and score lots more runs if not for his collapse into temptation. Finally released from jail in 2012, he is now focused on rebuilding his life away from the game he loved.

Saeed Ajmal is the very definition of the modern day off-spinner. Not making his international bow until quite late in his career, he has certainly made up for lost time since. Although his stock off-spin ball turns into the right hander, he does also have a sumptuous doosra that turns the other way. Ajmal is a master of disguising his deliveries by bowling them with the same action on the same line and has taken many wickets with his doors.

As the man himself says “if I take 70% of my wickets with the doosra, why should I not bowl it?” Not one to bowl with great flight, he instead bowls flat and gets as much pace as possible into his deliveries. His 5 for 82 against England in 2010 was a joy to behold and his doosra certainly bewildered the English batsmen on that day.

When you have a nickname like ‘Boom Boom’, you know you are not known for your elegance and diplomacy. With Shahid Afridi, this was definitely the case! Revered for his explosive batting, Afridi only knew how to attack. He would slog and smash any ball that came his way with often thrilling results. He was certainly the man all the fans turned up to see when he strode out to the crease, that’s for sure! His technique was more power than precision but it worked beautifully on many occasions.

As well as his superb batting skills, Afridi also was a great leg-spin bowler. As well as his standard leg-spin ball, he had two variations on the googly which were great weapons he called on in his career. Afridi could also get a great amount of flight and drift into his deliveries which made him very effective when called on.

Although the limited overs game was where he really shone, he played a fantastic 27 games and made 1,716 runs. A brilliant player throughout his career, no-one in world cricket knew how to entertain like ‘Boom Boom’!

As is the case with a few great Pakistani players, Mohammed Yousuf was no stranger to controversy! As a cricketer though, he was simply sublime. One of the few Pakistani batsmen who had the mental focus to bat for long periods, he was the calm in a Pakistan innings where all were falling around him. He possessed a very elegant batting style and a distinctive high back-lift that saw him play many excellent strokes.

Very strong in the square and behind it on the off-side areas, he had great footwork too which he used to great effect. His best innings was a brutal 223 against England in 2005 although his 204 against Bangladesh in 2002 was a very close second. Sadly for the player he was one of a few senior Pakistani players suspended following an ill-fated Australian tour. As such, his international career came to a premature end as he then retired.

Top of the list for the best Pakistan player in the years 2000-2010 is Younis Khan. One of the best batsmen in the history of the sport, he achieved many records in his career. Although not the most elegant of player at the crease, he had a solid technique and superb temperament. This mental resolve meant he thrived in adversity and often played better when the heat was on.

Khan’s many records include the most runs and most centuries scored by any Pakistani player in the countries history. Even better, he is the only player ever to score centuries in all 11 countries that hold Test match cricket! All this shows just what a great player he was.

Khan would eventually captain his country, although after the ill-fated Australian tour he was suspended for not controlling the divisions and in-fighting within the dressing room. He finally returned and went back to what he did best – scoring runs! In all he played 118 games and made 10,099 runs which is simply amazing. His best knock was a stunning 313 against Sri Lanka in 2009 here he showed just how good he was.

While the decade was a turbulent one at times for Pakistan, with the match-fixing scandal and controversy ridden tour of Australia, these players were simply exceptional. They can all rest safe knowing that the figures they finished with show just how good they were.