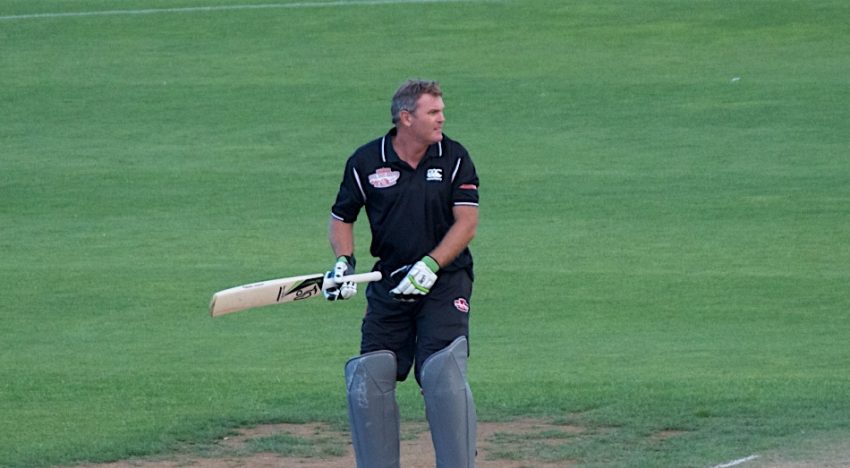 In the game of cricket, statistics can highlight a player’s achievements and show where he stands among his peers, but at times they can also prove inadequate. 77 Test Matches, 5444 runs and an average of 45.36 may not sound like exceptional achievements for a batsman. After all, there are 79 cricketers who have scored more runs so far. But Martin Crowe wasn’t just another cricketer; he was an enigma who carried the hopes of an entire nation every time he took guard at the crease.

When he made his Test Debut, the side were considered minnows of the game and when he finally bid goodbye New Zealand had attained the status of challengers who could take on any opposition in different conditions. What made him special is the fact that, even now, he remains the Gold Standard of New Zealand batting. Every great batsman who has represented the Kiwis since has been gauged against Crowe and the impact he had on the side. His untimely death has left a huge void in the game in New Zealand and denied many young cricketers the perfect mentor, a role Crowe had perfected since he retired.

There can be no greater testimony to the man than the fact that more than two decades after he hung up his boots he is still rated as the best batsman to ever play for the island nation. Let us turn the pages of Martin Crowe’s glorious test career and take a look at his top ten Test innings.

Martin Crowe didn’t have the most dashing of starts to his Test career. It surely wasn’t the easiest of tasks for a 19 year old lad to face Dennis Lillee and Jeff Thomson in his first Test series. He didn’t even cross the score of 50 in his first 7 Test Matches, which must have been disheartening for a young man who had incredible batting talent. However, when the English side came on tour, Crowe finally gave a glimpse of his talent, scoring his maiden century against a quality English attack which include Bob Willis and Ian Botham. It was a match saving knock in the third innings when his team was staring at loss. The manner in which the young man dealt with the attack made the cricketing world first take note of a talent who would go on to achieve great heights in the game.

A hundred at Lord’s is one of the most cherished moments for any cricketer in his lifetime. When New Zealand toured England in 1986, Martin Crowe had firmly established himself as his side’s best batsmen. He demonstrated his ability in no uncertain terms with a wonderful hundreds at Lord’s in the 1st Test Match of the series. On a testing wicket he was out with his side having lost two wickets for only 5 runs. He steadied the ship with opener Bruce Edgar and then with the middle order to bring up a well-crafted century that was highly praised by critics at that time. His performance helped his side take a small lead in the first innings before some determined batting by the English side saw the match end in a draw.

If there was one weak area in Martin Crowe’s batting it was his performance against spinners, especially on the turning wickets of the sub-continent. His batting average in these conditions dropped into the thirties from his career average of mid-forties. It was one of the most surprising deficits for an otherwise supremely talented batsman. However, this innings at Lahore silenced many of his critics, especially due to the manner in which he tackled Abdul Qadir. Batting first, New Zealand were dismissed for 160 runs and with 213 run deficit in the second innings the visitors were looking at a humiliating loss. But this unbeaten knock of 108 from Crowe helped his side take the total to a respectable 287. While it wasn’t enough to capture a win, this innings in tough conditions would have been quite satisfying for him at the personal level.

What is common among Sunil Gavaskar, Sachin Tendulkar, Brian Lara, Ricky Ponting and Jacques Kallis? While all of them scored more than 10,000 runs in Test cricket, they don’t have their names on Lord’s honours board. Martin Crowe has his name twice mentioned. In what was to be his last innings on this famous ground, Crowe came up with an artistic knock of 142. Batting first he held the innings together in a marathon effort that saw him spend over six hours in the middle. Though wickets kept falling at the other end, he stroked the ball beautifully to all corners of the ground and helped his side put a huge total on the board. Though New Zealand looked all set to win the game, a determined fight back from England meant that the game ended in a draw.

In what was to be his last Test hundred, Martin Crowe earned the applause of the English media and fans. Being one down in the series, New Zealand were bowled out for 151 runs in the first innings after England had put 382 on the board. Crowe had top scored with 70, as there was little contribution from the other end. Following on, he came into bat with his side again reeling at 48 for 3. From there, it was the Martin Crowe Show all the way in what is still regarded as one of the best fighting knocks played by a Kiwi batsman. He was the last man to fall with the score at 287. Crowe cleverly played out time to ensure that England didn’t get a chance to bat again and the match ended in a draw, much to the delight of Kiwi fans.

Basin Reserve, Wellington had been one of the favourite hunting grounds for Crowe throughout his career. In the 10 test matches that he played at this ground Crowe amassed 1123 runs at an incredible average of 70.18 which included 5 hundreds. This one against Pakistan would have been one of his most satisfying knocks because the attack included Imran Khan, Aquib Javed, Mudassar Nazar and Abdul Qadir. When Crowe came in, his team was struggling at 18 for 2, but for the next 10 hours the Pakistani attack looked clueless as Crowe paced his innings to perfection, building important partnerships with the lower order to take his team past the 400 run mark. Though this Test Match ended in a draw it would long be remembered for the innings Crowe played against a quality bowling attack.

If there is one Test innings that defined the batsmen that Martin Crowe was, it was this one at Christchurch. Though the match ended in a draw, every New Zealander who watched the game would have bowed down at the sheer courage of this man. Just after crossing 50, Crowe was hit by a bouncer from Bruce Reid. Blood spilled out as his jaw was split and he had to leave the field in intense pain. Few who would have expected Crowe to bat again, but he bravely came out and went on to score one of the best centuries of his career, eventually succumbing as the last man to get out. This determined, iconic innings ensured that the side claimed a deserved draw after Australia had put up a big total in the first innings.

This was one of New Zealand’s most famous test wins against their arch rivals Australia at Brisbane. It is often remembered for Sir Richard Hadlee’s 15 wicket match haul where he claimed 9 scalps in the first innings and came close to equaling Jim Laker’s revered record. But it was also the game where Crowe played one of his most satisfying Test knocks. After dismissing the hosts for 179 runs the visitors put up a huge score of 553 in the first innings, mostly thanks to a powerful 188 run contribution by Crowe. It was unfortunate for him to miss out on a double hundred, as a momentary lapse in concentration saw him fall to off spinner Greg Matthews. But Crowe would have celebrated this innings as the Kiwis were able to defeat Australia comprehensively by an innings and 41 runs.

Imagine a Test Match at Georgetown when the West Indies were at their peak and the bowling line-up had Malcolm Marshall, Joel Garner and Michael Holding. Any batsman’s feet would tremble at this very proposition. But in sport, such circumstances often bring out the best performances from champion players. When Crowe came out to bat, his side was struggling at 45 for 2 after the West Indies had plundered 511 in the first innings. Facing a fiery pace attack, he held the innings together during his 10 hour stay at the crease taking his side to 440 and being the last man to fall. This innings has always been rated to be one of the best ever by a New Zealander and the fact that it came against such a quality bowling attack made it all the more special.

This is one innings that would have hurt Crowe almost as much as it would have satisfied him. For the record, it remains the only instance of a batsmen being dismissed on the score of 299 in a Test Match and at that time was also the only instance in First Class Cricket. Going into bat in the second innings, New Zealand were 323 runs behind and Crowe arrived at the crease with his side at 148 for 2.. From here he built a monster partnership of 467 with Andrew Jones, which was a record for any wicket at that time, and took his side to 671 for 4 ensuring a draw. Unfortunately, a slight error of judgement saw Crowe edge one to the keeper off the bowling of a nonthreatening Arjuna Ranatunga, leaving him stuck on 299. Crowe later revealed that this one run continued to haunt him, but there can be no denying that he produced one of the most entertaining and scintillating innings of all time.