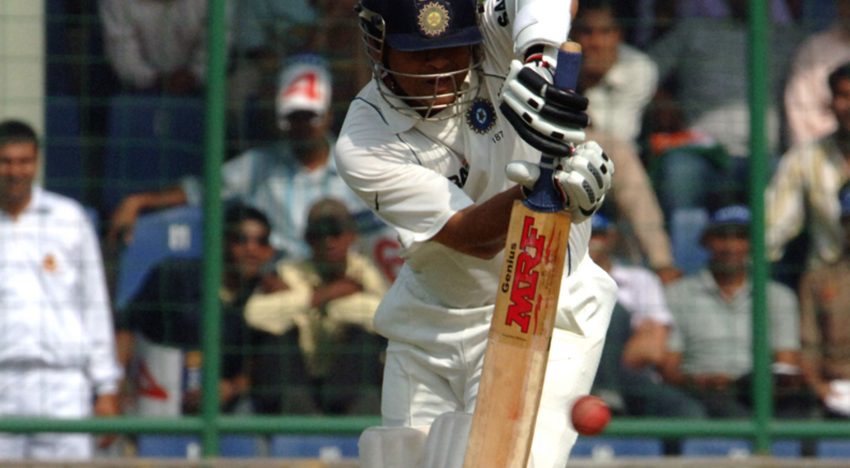 Sachin Tendulkar can be seen as nothing short of a colossus of the modern game. The statistics of his glittering Test career make clear how outstanding a player he was: more runs and centuries than anyone else by far, and an average of over 53 across a career spanning 24 years and a remarkable 200 matches. Yet even this does not tell the whole story, as no figures could encapsulate the ability of a player such as the ‘Little Master’, who combined power and elegance, talent and concentration, every time he came out to bat. To pick ten of his greatest performances is certainly no east feat, but there are certain moments which stand out even among such a consistently brilliant career.

Tendulkar made his Test debut in 1989 at the tender age of 16. What would already by an overwhelming experience for many was made even more so by the fact he was playing away in Pakistan – hardly the most welcoming experience for a young Indian cricketer – against one of the finest pace bowling attacks in history, with Wasim Akram, Waqar Younis and Imran Khan at their peaks. Tendulkar, though, showed maturity beyond his years in his first few matches, marked in particular by a half-century in the fourth match of the series. Tendulkar came in to bat in the second innings with his side at 38 for 4, with the threat of defeat looming. His innings, which lasted more than three hours, helped see his side to safety. While not at his stroke-making best, he showed the kind of focus and determination required to succeed in the longest format, earning the attention og many in the process.

Through the formative matches of his Test career, Tendulkar had performed well, making a number of important half-centuries. In his first tour of England, though, he had begun with disappointing match at Lord’s, failing in both innings in a dispiriting Indian defeat. With the potential for questions to be asked about whether the young talent could perform in swinging English conditions, Tendulkar responded to the defeat in the best possible way. In the second Test at Old Trafford, despite Tendulkar making an accomplished 68 alongside Mohammed Azharuddin’s outstanding century, the Indians went into the final day attempting to salvage a draw. Walking in with his side at 109 for 4, the 17-year-old made an outstanding counter-attacking 119, showcasing his full repertoire of strokes in the process. He saved the game for his side, and, despite his young age, announced himself as a member of the world’s cricketing elite.

By now one of the key players in the Indian team, Tendulkar and his side had endured a torrid tour of Australia in 1992. Going into the fifth Test, they were 3-0 down and utterly demoralised. In response to Australia’s 346, much of India’s top order collapsed, falling for single figures. Only Tendulkar offered strong resistance, with a fluid and elegant century that many have described as one of his finest. Ultimately his effort was more symbolic than game-changing, as Australia went on to win yet again, taking the series 4-0. However, it served as testament to Tendulkar’s ability and character that despite playing on one of the world’s quickest pitches against fine fast bowlers while his team was severely low on confidence, he was able to deliver such a scintillating performance.

Tendulkar his risen through the ranks of the Indian so effectively that in 1996 he was appointed captain of the Test team, succeeding Azharuddin in the position. His time leading the side, though, was in large part unsuccessful, with only 4 wins in 25 Tests at the helm. Yet his struggles as captain clearly did not affect his performance with the bat, as his performance against South Africa showed. With South Africa essentially having put the game to bed with a first innings score of over 500 followed by their reducing of India to 58 for 5, they needed someone to at least help them save face. Tendulkar performed this role excellently, building an aggressive partnership of over 200 with Azharuddin while making 169. India still went on to lose the match, but here was further evidence of Tendulkar’s unwillingness to give up when the going got tough.

When India and Australia locked horns again in 1998, Tendulkar offered a perfect example of his game-changing ability with another world-class knock. The first match of the series at Chennai started poorly for him, being dismissed for 5 as India found themselves behind after the first two innings of the match. Tendulkar came out to bat in the second innings at a crucial juncture in the match, with his side at 115 for 2, constituting a lead of just 44 runs. On a turning pitch against a talented bowling attack that included Shane Warne, he built substantial partnerships with Rahul Dravid and Mohammed Azharuddin, while scoring at a rate of over four runs per over. By the time his captain declared to end Tendulkar’s innings on an unbeaten 155, he had guided his side to 418 for 4. All that remained was for India’s bowlers to skittle the Australian batting order for 168, giving them victory and earning Tendulkar a Man of the Match award.

Nowhere in the world is Tendulkar more beloved than in his home city of Mumbai. Of course, this adoration reaches his peak when he puts in outstanding individual performances as he did in 2000. While the rest of his side folded disappointingly in the first innings of their first Test against South Africa, Tendulkar did not give in so easily, making a fluent 97 to singlehandedly hold off his opponents. He followed this up by proving his all-round importance to the team by taking 3 for 10 with his part-time spin bowling, including removing both openers after they had reached 90 for no loss. Although India ended up succumbing to a disappointing defeat, Tendulkar’s individual brilliance was recognised, as he accomplished the rare feat of being announced as Man of the Match despite being on the losing side.

After more than a decade of consistent Test performances, Tendulkar finally hit a lean spell in 2003. Throughout the year, he averaged only 17, and made just one half-century, leading to serious questions about how long his malaise would last. However, his first game the following year, the final match of a well-contested series in Australia, saw him return to form in spectacular fashion. Tendulkar, batting in India’s first innings, showed little of the elegance and fluidity that had previously defined his career, but what he lacked in these attributes he more than made up for in discipline and concentration. He avoided taking any risks with his strokeplay, building a measured innings of 241 not out which lasted more than ten hours and included a partnership of over 350 runs with VVS Laxman. He followed this up with an unbeaten half-century in the second innings, putting to bed any issues surrounding his form.

While we saw Tendulkar at his scintillating best in this innings, his fine performance in other circumstances would have been overshadowed by his failure to reach a century while his long-term comrade in arms Sourav Ganguly did so. What made this innings so memorable was a glance down to third man for 3 runs off pace bowler Peter Siddle, for these were the runs that took the Little Master’s career tally past that of Brian Lara, making him the all-time top Test run-scorer. Just for good measure, he continued on to become the first man to reach 12,000 Test runs later in the same innings. In a sense, the 40-odd overs in which he was at the crease in Mohali encapsulated his career perfectly, as he not only dominated the opposing bowling attack with style and grace, but caused record after record to topple in the process.

When the Test series between India and England finally got under way, having been postponed and then rearranged following horrific terror attacks in Mumbai, the whole country of India was willing on their Test team for something to celebrate. Yet India found themselves behind for almost the whole game, eventually being set the unlikely target of 387 to win. Having been given a platform by the aggressive Virender Sehwag, Tendulkar came in with nearly 250 runs still to chase on a deteriorating fifth-day wicket. Showing the kind of concentration and calmness that had seen him become a fixture in the Indian side for the best part of two decades, he accumulated a wonderful century while guiding his side to the fourth highest fourth-innings run chase of all time, capping a remarkable turnaround for India.

By now in the twilight of his career, Tendulkar showed in South Africa that age was no obstacle to his ability. Coming in with his side at 28 for 2 after the South Africans had made 362, the Little Master needed to draw on over 20 years of Test-playing experience to keep out a ferocious bowling attack led by Dale Steyn and Morne Morkel. Facing near-unplayable deliveries from Steyn in particular, Tendulkar maintained his composure, occupying the crease for more than 100 overs to usher his side into a marginal lead. After South Africa responded strongly, Tendulkar again blunted the South African attack in making a two-and-a-half-hour 14 not out, to ensure his side earned a creditable draw in both the match and the series.