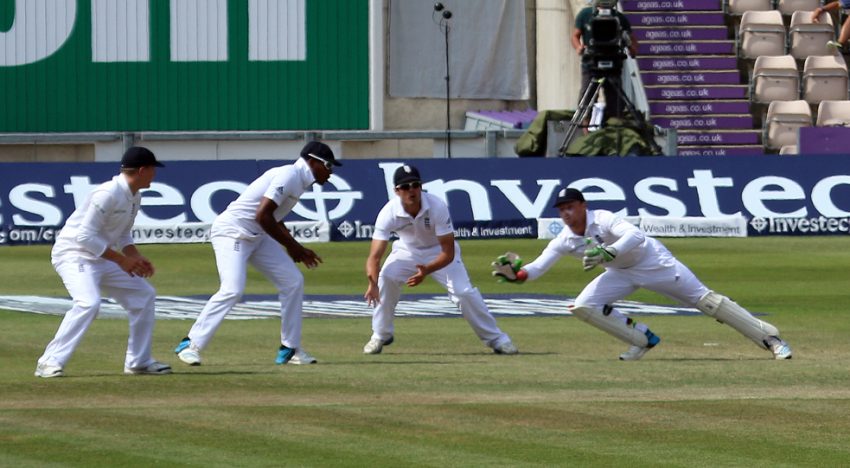 Over time, the role of the wicket-keeper has changed. Gone are the days when a ‘keeper wasn’t expected to contribute with the bat and the purest gloveman in the country would get the nod over an all-rounder. Now, a keeper is expected to win games in the field and in the middle, as well as captain on occasion. He has to be the heartbeat of the side. With that in mind, our list of England’s greatest stumpers takes into account these players’ all-round skills – keeping, batting, and leadership.

Were this list based solely on glovemanship, then Read would be higher up – and James Foster would be in it – because he was a master of his craft behind the stumps. More than 50 Test dismissals (and another 43 in ODIs) highlighted that and he is the only man to claim six dismissals in an innings in consecutive matches. However, he lost his place to Geraint Jones and then Matt Prior because his batting didn’t offer enough. Famously made to look silly by ducking into that Chris Cairns yorker in 1999, he is a better player than that and some would argue that England haven’t had a purer keeper in the side since.

Like a few others that just missed out on inclusion in this list – Warren Hegg, Richard Blakey, and Paul Nixon come to mind – Rhodes often had to play second fiddle to Alec Stewart so his chances at international level were limited. He was due to tour India in 1988/9 but as that tour was cancelled he had to wait until 1994 to make his Test debut. In 11 Tests and 9 ODI appearances, however, he managed three dismissals per match – higher than anybody else on this list (Alan Knott is next with 2.48). The summer series at home to South Africa, where he claimed 14 catches and two stumpings in three matches was his high point; like Read, failure to score enough runs meant he soon lost his place in the side. He went on to score almost 15,000 first-class runs and took well over 1,000 catches for Worcestershire.

Parks was one of England’s fine early glovemen, plying his trade with Sussex and then Somerset. An accidental wicket-keeper, he started his career as a batsman but once given the gloves due to an injury in a county match, he went on to claim a century of catches and 11 stumpings in Tests. An attacking batsman, he scored 1,962 runs and averaged well over 40 runs per international appearance, a more than credible effort given the era in which he played. A real all-rounder, he took 51 first-class wickets with a best of three for 23 bowling leg-spin.

Duncan Fletcher wanted him in the Test side well before he made his Test debut in 2007 and it is easy to see why. His glovework improved considerably during his international career but England traded the odd mishap for the quick runs and energy he brought to the lower order with the bat as well as his attitude in the field. Well over 4,000 Test runs (and 1,006 ODI runs) puts him behind only Alec Stewart but he was as close to an English Adam Gilchrist as they ever had. It was perhaps apt that when injury curtailed his career, it was Jos Buttler, a similar type of player, who replaced him.

Scorer of very quick centuries, inventor of strokes and sometime England captain, Jos Buttler is the archetypal modern cricketer who has the ability to change the course of matches, although he does it with his bat rather than with the gloves. Approaching 50 Test dismissals, he has long since passed that figure in ODIs, where he has struck almost 2,500 runs at an average of just under 40. Perhaps the most versatile wicket-keeper England have had since Alec Stewart, but far less likely to be asked to open the batting in a Test match. His glovework will only get better as he becomes more experienced so he has the potential to rise up this list in the years to come.

Gloucestershire stalwart Russell was an outstanding keeper and but for Stewart would have played more than the 54 Tests and 40 ODIs he did, taking 194 catches and 18 stumpings. His eccentricity has been widely documented, but his finesse and bravery behind the stumps could not be faulted. Brilliant when standing up to medium pace and quick bowlers, he was incredibly agile and rarely missed a chance. No wonder that England played both Stewart and himself when they could and there were times that Russell’s batting – notably against Australia 1989 and South Africa in 1994/5 – helped stave off defeat for England.

Godfrey Evans makes the list for his longevity, skill, and brilliance. He played 91 Tests as wicket-keeper, a record that stood until Alan Knott overtook him. During that time, he scored 2,439 runs, took 173 catches and 46 stumpings – double the number of nearest challenger Les Ames. Notably, he let through no byes during Australia’s innings of 659-8 declared in 1946-7 and didn’t concede one at all until 1,000 runs had been scored against England in the series. On that same tour, he also took 97 minutes to score a run as he and Denis Compton steered England out of danger. A maiden Test century came in 1950 and he was rated by those he played with and against as the best keeper in the world at the time. His batting wasn’t quite consistent enough, however, to place him any higher in this list.

Surrey’s Ben Foakes recently called Alec Stewart “the best wicket-keeper in the world”. That is an argument for another day, but in terms of his all-round capabilities and versatility, he was arguably the best man England ever had for the job. He took the gloves on 82 occasions (and played another 51 times as a specialist batsman) in Tests and played 138 ODIs. In that time, he claimed 404 dismissals, scored 8,557 runs – both England records – and as if that wasn’t enough, even captained the side, too. In fact, nobody has captained, kept wicket, and opened the batting in ODIs more often than him. Happy to take on whatever role he was asked to do, he managed all of that while playing in an England side that usually flattered to deceive, although he kept wicket as they reached the 1992 World Cup final.

Ames was perhaps England’s first wicket-keeper-batsman and Wisden called him the best of all time when he died in 1990. In 44 Tests, he scored 2,434 runs while taking 72 catches and effecting 23 stumpings. He scored more runs per international appearance than any other on this list, which, even when you take the modern-day prevalence of ODI cricket into account, is a remarkable feat. Something of an all-round talent, he also took 23 first-class wickets, spending the entirety of his career with Kent and played football for Gillingham. He still holds a plethora of records: he is the only wicket-keeper to score 100 first-class hundreds; scored 1,000 runs and claimed 100 dismissals in three separate seasons; and was the first wicket-keeper to score a century from number seven in a Test. A real trailblazer, his international career was brought to a premature end by World War Two, although he played first-class cricket until 1951, then managed Kent to the County Championship title in 1970.

Another in Kent’s illustrious line of wicket-keepers, Knott was a silky-smooth gloveman and a batsman who scored important runs. Who was there at the other end to help England recover from 82-5 after Boycott had run out Randall at Trent Bridge in 1977? That was Knott, whose 135 helped set up victory. Four other centuries came during his fine Test career. Nobody kept better to legendary spinner Derek Underwood and they formed a devastating partnership for Kent and England. No Englishmen has kept in more Tests than he has (95) and nobody has more catches (250). Ultra-reliable with the gloves, he also played 20 ODIs, claiming 15 catches and one stumping. He marked his Test debut with a duck but conceded no byes. He once scored seven from a single delivery against the West Indies, was briefly England’s ODI captain and made Wisden’s All-Time World Test XI. Knott was the keeper that inspired Russell to take up the gloves and doubtless many others too.