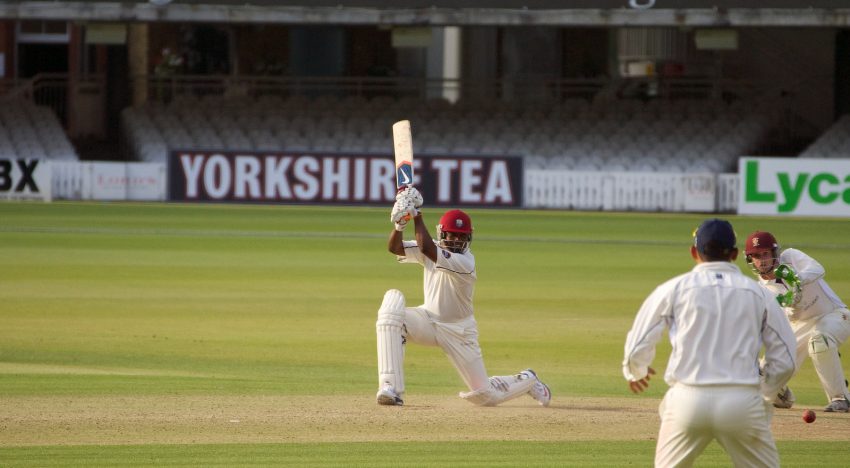 The West Indies are a proud cricketing nation and even a quick glance through their history in the sport shows you why. While they may not have been at their 1980’s or 1970’s peak in the modern game, they still turn out great players with plenty of skill. West Indian cricket during the 1990’s was an example of this turn in the country’s cricketing fortunes – they were the best team in the world arguably going into the decade, but by the end had fallen well below those standards. There were still some fantastic players to pull on the whites for them during this time though, so let’s take a look at ten of the very best:

We start our list with a controversial character who was loved by the people but seemingly not by the West Indian selectors or management! Ramnarine was a very effective leg-spin bowler who sent the ball down with a flat trajectory which helped him fool batsmen. He had what looked a glittering future in international cricket ahead of him before retiring early at the age of 28.
It seems his outspoken nature led him into conflict with those in authority not only behind the scenes but sometimes on the field. Who can forget the match against Pakistan in 2001/02 when he had a very public spat with his captain, Carl Hooper? This was despite only making his debut in 1998! Unfortunately, these types of disagreements led him to be left out of the West Indies squads and he chose to retire on this basis. It should not be forgotten though that in 12 Tests he took 45 wickets which is a pretty good return and gets him his place here. If you look at the side he was in when he started in 1998 then this is actually very respectable.

Just sneaking onto our list with a debut in 1999 is Corey Collymore. He is a superb player whose career has been somewhat blighted by injuries and stress fractures. On his day though, his right arm medium-fast deliveries coupled with the seam and swing he gets are fantastic to watch. While not lightning quick, he has enough pace to trouble batsmen and great accuracy to put the ball exactly where he wants it.

His 93 wickets in 30 Tests shows his ability with the ball and it really is a case of what might have been for this guy. If injuries hadn’t curtailed his playing time over the years and forced him to re-model his bowling action, he could have been one the premier quick bowlers in the world. At a time when the West Indies were desperately searching for this type of player at the required level, he would have been very handy.

If ever there was a case of what might have been in 1990’s West Indian cricket, it is Sherwin Campbell! A daring, dashing and destructive left-hand opening batsman, his talent was there for all to see. His range of attacking shots was superb and he could score runs quickly to hit bowlers out of the attack. However, his natural attacking instincts were also part of his downfall. He was just as likely to edge a ball with a risky shot as hit it for 6 and march towards a century! Due to this risk-taking approach, he did not achieve what he could have in international cricket for his country.

Having said that, Campbell’s record is not bad at all. He played 52 Tests and scored 2,882 runs at a 32.38 average which, in the teams he played in during the 90’s, was pretty good. A particular highlight for this player was his 208 not out against New Zealand in 1995/96 – this innings lasted for thirteen hours and included 30 fours!

Once labelled as the ‘new Courtney Walsh’, Dillon was a right-arm fast-medium bowler who had decent pace in his arm. His best delivery was the ball that angled in then held its own which deceived many a batsman. His action was reminiscent of Walsh also with a hint of the same well-oiled efficiency. On his day, he could be unplayable and in the late 1990’s he was the main spearhead of the West Indies bowling attack.

In all he played 38 Tests and took 131 wickets which shows that the talent people had seen in him was there. In the 1990’s one of his best spells was the 5 for 111 he took against Pakistan in 1997 to announce his arrival onto the international scene. Beyond that most of his better work came in the 2000’s. As newer, younger bowlers came to the fore Dillon fell away somewhat but he was still a great bowler and one of the Windies best in the 1990’s.

One of the names most closely associated with West India cricket in the 90’s was Jimmy Adams. Making his Test debut in 1992 and playing on until 2001, he was an ever-present member of the team during that period. A left-handed batsman who was noted for his steady play and ability to build an innings, he was also very useful in the field. His sharp reflexes and agility were most effective in the gully and he was usually placed there when his side were not batting.

Adams also went on to captain his country, taking over in 2000. It must be said his record was not spectacular with 8 losses, 3 draws and 4 wins but he did the best with the players he had available at the time. He only found out he had lost the captaincy when a reporter told him about it after a match! This doesn’t take away from Adams abilities as a player. His 208-high score in the 1994/95 Test against New Zealand shows just how effective he could be at the crease.

Although Carl Hooper made his debut in the 1980’s, he played all through the 1990’s for his country and was a very important figure for them in the decade. As such, we will include him here in the same way as Courtney Walsh and Curtley Ambrose deserve their place on the same basis.

A right-handed batsman, he was also a useful off-spin bowler for his country too. One of his best traits were the quick feet he had and he used this footwork to great effect many times. It came in very handy against slower bowling and enabled him to play spinners well. He had a brutal yet elegant style to his shots that made him a joy to watch – well, for West Indies fans! The only flaw he had really was his focus – he would routinely be dismissed prematurely due to a momentary lapse in concentration. Very strong in the field, he took many catches in the slips for his bowlers and helped get numerous wickets for them.

Hooper also went on to captain his country with distinction and became the first player ever to score 5,000 runs, take 100 wickets, take 100 catches and received 100 caps in ODI and Test cricket. This superb feat shows what a great player he was.

Shivnarine Chanderpaul was certainly one of the best players to represent the West Indies throughout the 1990’s. Nicknamed ‘Tiger’ for the attacking style of play he initially showed, he was a superb batter who could use his explosive power to great effect. As the West Indies team around him grew weaker over the decade, he changed to a more defensive method and became the man who anchored the innings. Indeed, so hard was he to get out that the great Shane Warne said he was “a bloke you needed to crowbar away from the crease”!

Most famous for his crab-like stance, Chanderpaul showed that there is life beyond the coaching handbook and also that there were other talents in the West Indies besides Brian Lara. Possessing a fine hook shot, he also had soft hands which made him very good at deflecting balls away to the gaps in the field. Chanderpaul became only the second West Indian to score 10,000 Test runs which is proof of his awesome batting skill.

Highlights of a glittering career for the decade we’re concerned with were a brilliant 137 not out against India in 1997 and a fine 118 against England in 1998. He may not have been the most orthodox batsman out there but he was certainly one of the most effective.

Making his debut in 1988, Ambrose continued through the whole of the 1990’s. A lethal fast bowler, he was one of the premier quicks of the 1990’s along with Courtney Walsh. A tall man, he interestingly refused most press interviews by saying “Curtley talk to no man”. This silence only added to his menace though and along with his sublime talent made him an exceptional player.

As far as Ambrose’s bowling went, it was quite simple. His height allowed him to get great bounce and that allied with his pace and accuracy was a winning combination. Many batsmen were simply unable to handle this mixture and he bagged numerous wickets as a result. An example of this was in 1993 when he took seven wickets against Australia for just 1 run! This highlighted another aspect of his bowling as he often took his wickets in clumps.

Other majestic performances from the big guy include 6 for 24 to skittle England out in 1994 and 8 for 45 against England in 1990. As you can see, he liked playing England! He was effective against all countries, though, and this is what made him such a great bowler. With 98 games played and 405 wickets taken, the West Indies owe him a huge thank you for all he did.

In conjunction with Ambrose, Courtney Walsh was immense in the 1990’s for his country. They formed an amazing opening bowling partnership that took 421 wickets between them from 49 matches when bowled together. Walsh was every bit as fearsome as Ambrose and sent the ball down with great pace. His economical action was not entirely orthodox but extremely effective as many batters found out.

With 132 Tests played and 519 wickets to his credit, he really was a nightmare for batsmen to face. New Zealand found this out the hard way in 1995 when he ripped through them, taking 7 for 37. This was followed up with 6 for 54 against Australia in the same year! You could list many more examples throughout the whole decade to show how excellent he was and as such there is no doubt he deserves his lofty place on our list.

It’s no surprise that this man heads our list – Brian Lara would be up there on a list of the greatest West Indies cricketers ever, never mind just in the 1990’s. Widely acknowledged as one of the greatest batsmen of all time, he was a sumptuous player to watch. Even his stance at the crease was exciting with the bent front knee and raised bat, just daring the bowler to send the ball down. Once it was on its way, Lara came into his own. Possessing the full range of strokes, his attacking play in particular was sublime. This allowed him to build big innings quickly as he smashed balls to the boundary.

Lara’s littered the decade with achievements. His 375 against England in 1994 (at the time, the highest score in test cricket history; a mark Lara would later better with an astonishing 400 in 2004) – was simply immense. His match-winning 153 against Australia in 1999 comes a close second. Both innings showed off his quick feet, explosive power and superb shot selection. By the time he retired, he’d played 131 Tests and scored 11,953 runs!

Although the 1990’s was not the finest decade for West Indian cricket (certainly towards the end of it), there were still some top-quality players and performances. Any team who could put out players like Lara, Ambrose, Walsh and Chanderpaul certainly deserves the utmost respect. The West Indian fans will be hoping they churn out more of these sorts of players and march back to the top of the cricketing world once more.