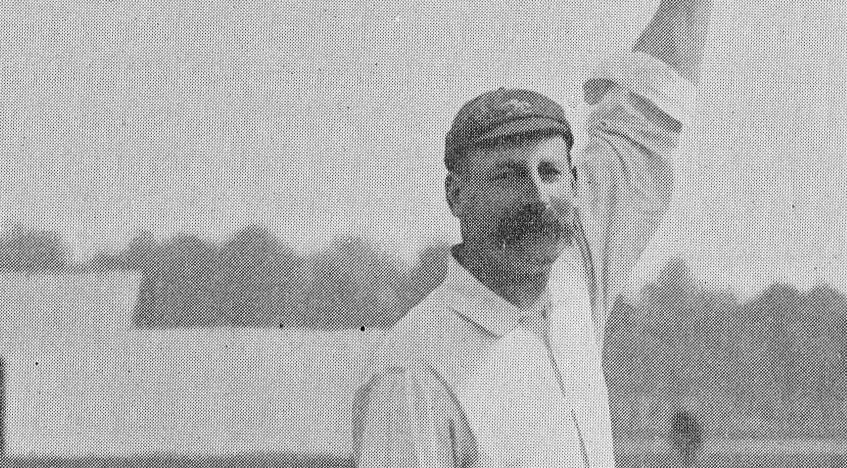 Every bowler aims for a grand debut where he can establish his talent on the big stage. Few are so lucky and there are many greats of the game who managed only average performances in their first Test appearances. There are, though, a select group of bowlers who have made truly sensational starts to their careers. Sadly, few of them lived up to the initial promise they showed – some lost form, others weren’t treated well by their respective boards – but one thing all of them can be proud of is their remarkable debut efforts. So here is our list of top ten bowling performances on Test debut.

Life can be unkind to some people and there are many such examples in professional sports. If we talk about cricket the name of South African fast bowler Sydney Burke immediately comes to mind. No bowler would expect to be named the 12th man in a test match after claiming 11 wickets on debut and get his next call three years later. During New Zealand’s tour of South Africa in 1962 at Cape Town Burke took 6 for 128 in the first innings and followed it up with 5 for 68 in the second innings, becoming the only South African cricketer to achieve five wickets in both the innings on debut – a record that still stands! But with his team losing the Test match, the selectors opted for other players and Burke was lost for ever.

Sir Alec Bedser was one of the core members of the English cricket team in the post-war years. The right arm medium fast bowler had earned his test call up against the visiting Indian side in their first tour of England after the Second World War. In the first Test Match at Lords in 1946 Bedser proved his credentials as a medium pacer picking up 7 for 49 in what is regarded as one of the finest examples of seam bowling on debut. The Indians had no idea how to handle his bowling, as most of them were bowled or trapped in front of the stumps. He also put on an impressive show in the second innings claiming 4 for 96 finishing with 11 for 145 in the match.

Shoaib Akhtar, the fastest bowler of the modern era, considered Mohammad Zahid to be a yard faster than him! It is quite a shame that such an incredible talent wasn’t nurtured well by the Pakistani cricket administration which brought an abrupt end to his career after five test matches. On his debut against the visiting Kiwis at Rawalpindi in 1996 he took 4 for 64 in the first innings restricting the visitors to 249. He followed this up with 7 for 66 in the second innings (six of which were bowled or leg before wicket) to help his side win by an innings and 13 runs, making him the first and the only Pakistani bowler to claim 11 wickets on debut.

Alfred Ewart Hall was another South African cricketer who had a short lived Test career playing only 7 matches for his side and finishing with an impressive bowling average of 22.15. On his Test debut, against the visiting English side in the second match of the tour at Cape Town in 1923, he claimed 4 for 49 in the first innings, helping to dismiss the hosts for just 113. With 173 runs to defend in the second innings he nearly bowled his side to victory claiming 7 for 63. Unfortunately, with little support from the other end, his impressive spell couldn’t prevent the visitors from scraping through to a one wicket victory in a keenly contested match. Still, Hall’s 11 for 112 remains the best bowling performance by a South African cricketer on debut.

It took Charles Marriott, one of the best exponents of googly, 14 seasons at the First-Class level appearing for Kent and Lancashire to earn his Test debut at the age of 38. Playing in the third Test Match against the West Indies at The Oval, during the latter’s tour in 1933, Marriott picked up 5 for 37 in his 12 overs in the first innings, knocking over the visitors for mere 100 runs. This allowed the English captain to enforce follow-on and Marriott to better his performance, picking up 6 for 59 and helping his team win by an innings and 17 runs. His match haul of 11 for 96 is the second best by an English bowler on debut. Unbelievably, Marriott never got a second chance in Test cricket. During England’s next tour of India he wasn’t selected to be a part of the squad.

Clarrie Grimmett was one of the best leg break bowlers of his era who could fox even the finest batsmen in the world. Earning his place in the squad for the 1925 Ashes, he made his debut at Sydney in the fifth Test Match of the series after Australia had taken an unassailable 3-1 lead. He started with 5 for 45 helping his team restrict the English side to 167 in the first innings. Set a target of 454, the English side folded for 146 in the second innings with Grimmett claiming 6 for 37 and taking his match haul to 11 for 82. At the time, Grimmett’s effort was the best performance on debut by an Australian – a record that stood nearly for nearly 50 years!

Indians have always been regarded as the best players of spin bowling but Jason Krejza gave them many nervous moments during his debut at Nagpur in 2008 during the fourth Test Match of the Border Gavaskar Trophy. Krejza took a remarkable 8 for 215 in the first innings against a formidable batting line-up that included Dravid, Tendulkar, Ganguly and VVS Laxman. He followed this up with 4 for 133 in the second innings, picking up a total of 12 for 358 and becoming only the fourth bowler in the history of the game to take 12 wickets on Test debut. The Indians comfortably won the match and Krejza played one more Test for Australia before being dropped from the team and ending his short, but memorable, Test career.

Frederick Martin, the left-arm spinner from Kent, played only two Test Matches for England but that was enough for him to register his name in the record books. Making his debut against the Aussies during their 1890 Ashes tour during the 2nd Test at Oval, his 6 for 50 in the first innings helped reduce the visitors to a meagre total of 92. With England achieving a small lead of just 8 runs, Martin took the challenge in the second innings and returned with figures of 6 for 52. While he would only play one more Test match in his career, he became the first bowler in the history of the game to grab a five wicket haul in both innings of a test match and his 12 for 102 remains the best bowling performance on debut by an English player nearly 120 years after he achieved it!

If anything could be called a ‘dream debut’ in a Test match Indian leg-spinner Narendra Hirwani had one. Making his bow against the West Indies in the fourth Test Match of the series in Chennai, Hirwani bagged 8 for 61 in the first innings, with the likes of Viv Richards and Richie Richardson among his victims. He followed it up another brilliant spell of bowling in the second innings grabbing 8 for 75. Hirwani could never repeat the magic and was perceived as a fairly ordinary bowler on unfriendly wickets but he still holds the Indian record of the best bowling on test debut and surely among the best in the history of the game.

Bob Massie isn’t one name that cricket fans would hear too often, which is understandable given the fact that he played only 5 Test Matches for Australia. But on his debut, against the Englishman at Lord’s during the second Test Match of the 1972 Ashes tour, he did something incredible. With the weather and pitch being conducive to swing bowling, Massie made the home side hop, skip and jump, as he picked up 8 for 84 restricting the English team to 272. The second innings display was even more impressive as he took 8 for 53 and bundled out the opposition for 116 runs, laying the perfect platform for an 8 wicket victory for his side. 18 months later his performance nosedived forcing even his home side Western Australia to drop him, but he will always be remembered for the most incredible of debut performances.