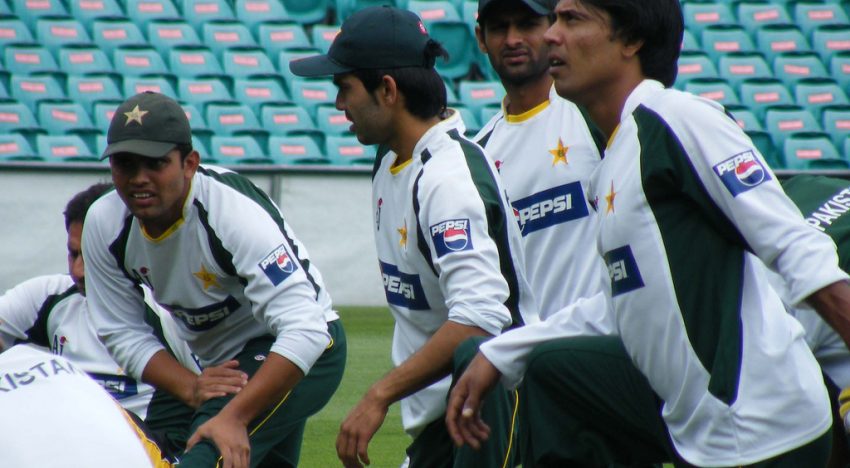 Pakistan has been a powerhouse of sub-continent cricket ever since its birth as a nation 70 years ago. While the team has often being accused of throwing matches and destroying great talents due to politics and inner team rivalries they have produced exciting cricketers nonetheless. These cricketers have entertained and enthralled not just their own fans but those around the world.
After combing through seven decades of history, we’ve picked Pakistan’s Best Ever Test XI, including stars from many different eras. The playing XI is listed in terms of the batting order.

Think of the best Pakistani opening batsman ever and the name Hanif Mohammad immediately springs to mind. Known as the ‘Little Master’ for his short built, Hanif was one of the first legendary batsmen to emerge out of the sub-continent. His marathon 970 minute innings of 337 against West Indies while saving a Test Match in Bridgetown in 1957-58 is still legendary among cricket historians. A true ambassador of the game, Hanif made batting look easy with his exquisite timing and class. In 55 Test Matches he made 3,915 runs at an average of 43.98, with 12 hundreds, and would undoubtedly give this team a strong start.

There were other Pakistani openers who scored more runs at a better average than Mudassar Nazar, but statistics don’t always tell the whole story. One of the most Pakistan’s most underrated cricketers, the versatile Mudassar would perfectly complement Hanif at the other end. At his best on the spinning tracks of the sub-continent, he had the capability of batting long sessions and in this team he would be expected to do the same. He scored a respectable 4,114 runs at an average of 38.09 with 10 hundreds. A regular medium pacer who took 66 wickets in his career, he would also be handy on seaming conditions.

There are no prizes for guessing who would take the guard at the fall of the first wicket. The one and only Zaheer Abbas, also known as the ‘Asian Bradman.’ There are few batsmen from Pakistan who made as much of an impact on the cricket field as Zaheer did and an average of 44.79 with 10 hundreds and 5,062 runs stand as a proof of that. He approached batting like an artist and there was class and elegance imprinted in every shot he played. A master of both spin and pace, he would be the ideal man to come in to replace the openers.

With 34 centuries, Younis Khan is the most successful Pakistani batsman of all time and one of only 13 cricketers who have scored more than 10,000 runs in the history of the game. His batting average of 52.24 also puts him into the top echeleon of batsmen from his generation. Younis would add immense strength to the middle order and his record all over the world and against the top teams is the perfect testimony to his skills and temperament. A great player of spin bowling, he would be expected to hold one end tight while others around him play aggressive cricket.

Taking guard at No. 5 would be the ever dependable Javed Miandad. With 8,832 runs at an average of 52.57 he is the second most successful Pakistani Test batsman. Given the quality of bowlers he faced in his career, Javed is undoubtedly one of the best batsmen ever to play for Pakistan. He enjoyed two decades of success against different generations of cricketers and, with his wide range of shots, especially against the spinners, he is the perfect man to bat at this position. Javed would be expected to play based on the situation of the game; he could comfortably hold an end or score at a brisk pace when the top order produces a big score.

There is no question on who would lead this team when there is a certain Imran Khan in the side. Imran was one of those inspirational skippers who could get extraordinary performances out of ordinary souls. But it isn’t just his captaincy that brings him to the team; he would make it based on his sheer talent and record over two decades. Imran’s 362 wickets make him the third most successful Pakistani and with 3,709 runs at an average of 33.41 he is the country’s best ever all-rounder. He would come as first change bowler or open the attack with Wasim and tease the batsmen with his in-swingers.

The great Wasim Akram would open the bowling for this team. The most successful left arm fast bowler to have ever played the game with 414 wickets, he would trouble even the best opposition batsman. He is fondly called the ‘Sultan of Swing’ for his ability to make the ball move both ways at will. Wasim would fox everybody from the openers to No. 11 with the variety that he possesses. A successful captain he would also be Imran’s deputy on the ground. Though not as great an all-rounder as Imran, Wasim has 2,898 runs which includes three hundreds and a double hundred!

Wasim Bari was the first star wicketkeeper for the Pakistan team and went on to play 81 test matches; no mean achievement as the side is known to chop and change players at will. A master at his craft, he is the most successful keeper for the country with 228 dismissals to his credit. Though he wasn’t as acrobatic as some of the other wicketkeepers during his time, he was as safe as a house behind the stumps and rarely fumbled on sub-continent’s notoriously challenging pitches. A great team man, he also captained Pakistan for a while and was admired by everyone around him.

When Abdul Qadir played, he was the only wrist spinner of repute in the world and was largely responsible for reviving the dying art. His 236 career wickets places him second among Pakistani spinners, but he would still lead the spin attack for this side. He would come to the party after the famed fast bowling attack has knocked the cover off the opposition batting line-up. If Wasim has six different balls per over, Qadir is perhaps the only spinner who could also make this claim to fame. During his superb career, he always kept the batsmen guessing with the variety he had up his sleeves.

Though he played only 49 Test Matches in his career, Saqlain Mushtaq would perfectly complement Qadir’s leg breaks with his off spinners, not allowing the batsman to settle down. Throw in a dusty sub-continent track and Saqlain would trouble anybody with his teasing line and flight. 208 wickets in a test career may not sound outstanding for a spinner, but the enormous impact Saqlain made throughout his career earns him the second spinner’s role in the side. And not to forget that this man also made the ‘doosra’ famous and would bowl it occasionally to put doubts in the mind of the opposing batsmen.

Waqar Younis is one of the fastest bowlers to have ever played the game and surely among the most aggressive. With 373 wickets in his career, he is the second most successful bowler after Wasim Akram among the Pakistanis and would share the red cherry with the Sultan of Swing. Together, they were regarded as one of the most dangerous fast bowling attacks of all time and would surely intimidate the batsmen. Waqar’s impressive strike rate of 23.56 is a testimony to his extraordinary skills as a bowler. He could truly make the ball ‘talk’ and his deceptive reverse swing with the old ball challenged even the most talented of batsmen.

Apart from all the greats who have made it to this team, there are a few who narrowly missed out. These players would also be a part of the 14 member squad and would be perfect replacements if any of the members of the initial playing XI is either dropped or runs out of form.

Leaving out a man who has scored 8,829 runs with an average of 50.16 was the most difficult call, but when pitted against Younis he lost out. Younis never enjoyed the kind of support Inzi had and had to often carry the team all alone. Inzamam would still be a part of the squad and fill in for any injured players in the top order.

Mushtaq Ahmed narrowly misses out to Abdul Qadir as both have similar skills with Qadir having a better record. Qadir also made his presence felt in the team a little more. However, if the team were to field three spinners on a sub-continent wicket, Mustaq would surely be called upon.

Having made 7,530 runs at 52.29 with 24 hundreds (and 10 of them coming in one year!) Mohammad Yousuf would surely be one of the most talented batsmen to sit on the bench. But unfortunately others in the team earned their places ahead of him given their own excellent performances.