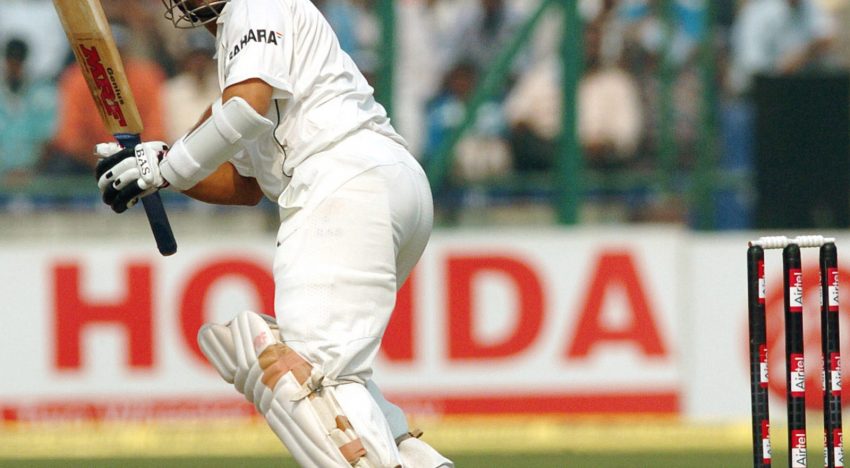 It isn’t easy to pick the best Indian Text XI with almost 300 players having represented the country since their first match against England in 1932. 500 test matches later, many legends have been made and folklores scripted both at home and abroad. As a rule, we have ignored current cricketers and focused on individuals who have hung up their boots. The tough ask was not picking the best possible team, but leaving out players who are legends in their own right. The selection below is as much about individual performance as it is about getting the perfect team composition. Picking the middle order and spinners was the toughest task, with a number of individuals narrowly missing out when pitted against those who made it to the XI. So, without further adieu, here is our best Indian Test XI, as per the batting order.

There are no prizes for guessing who would open the innings for the best Indian Test XI. Sunil Gavaskar was inarguably the best test batsman of his generation. He was equally comfortable against hostile fast bowling from the West Indians, as he was in swinging English conditions. With 10,122 in 125 test matches, he was the first batsman in the history to cross the magical 10,000 run mark. His impressive average of 51.12 is the perfect tribute to the short man who stood tall against the best and the fiercest bowlers of his time. Also a great catcher in the slip cordon, ‘Sunny’ would see the shine of the new ball and then start accumulating runs.

With his aggressive style of batting, Virender Sehwag wasn’t considered a natural test player. But he made his critics appear foolish and ended his career as one of the most successful Test openers of all time, behind only Gavaskar among Indians. With two triple hundreds to his name, Sehwag is in a rare club along with the great Don Bradman, Brian Lara and Chris Gayle. His swashbuckling hitting would perfectly complement Gavaskar’s elegant style. Sehwag ended his Test career with 8,586 runs at 49.34 with 23 centuries. His career strike rate of 82.33 is the highest among batsman who played 100 test matches.

Rahul Dravid earns the No. 3 spot in the batting order without any question. The fourth highest run scorer in the history of the game, ‘The Wall’ consistently played the anchor role for the Indian team in his remarkable career. Some of India’s most memorable test victories, both home and away, saw Dravid playing long innings and making a starring contribution to the team’s cause. With 210 catches, he is also the most successful fielder in the history of the game. By the time Dravid hung his boots, he had made 13,288 runs at an average of 52.31 with 36 hundreds to his name.

To celebrate 150 years, Wisden Cricketers’ Almanack named a World XI line-up, with ‘The Little Master’ Sachin Tendulkar to follow the great Don Brandman at No. 4. It is no surprise that the brilliant Tendulkar makes it to this list and would bat at No. 4, just as he did on most occasions throughout his career. Sachin’s 15,921 in 200 Test appearances, including 51 centuries and an impressive average of 53.78, is unmatched among any living cricketer. The best batsman of his generation, Sachin is often considered the second best batsmen to have ever played the game, after the great Don himself. Tendulkar would lend stability to the batting order and aggressively score runs when presented with the right opportunity.

There were a lot of contenders for the No. 5 position with Vengsarkar, Ganguly and VVS Laxman at the fore, but the stylish Gundappa Vishwanath makes it to the team because of his ability to score heavily against the highest quality quick bowlers on fast pitches. ‘Vishy’ was a gifted batsman, equally at ease against both spin and pace, and universally regarded as one of the toughest players to bowl against. Though his average of 41.93 doesn’t quite do justice to his talent, there were people who would pay anything to watch Vishwanath play when on song. In this team, he would steer the innings following more accomplished batsmen in the order and also rescue the team in case of a top order collapse.

Mahendra Singh Dhoni would wear the big gloves for the team and would also contribute with the bat in the middle order. Critics often questioned his technique as a keeper but Dhoni achieved oustanding results with his unorthodox style, especially keeping to the likes of Anil Kumble and Harbhajan Singh for most of his career. With close to 5,000 runs and more than 300 dismissals in 90 test matches his record is second-to-none among Indian wicketkeepers. He would also be the team’s Vice Captain and offer vital insights to the captain, acting as his eyes from behind the stumps.

India’s tryst with fast bowlers can easily be divided into pre-Kapil and post-Kapil eras. Before Dev, the Indian team had produced very few fast bowlers of any repute and by the time he retired a new generation was taking shape under his wings. With 434 wickets and 5,248 runs, Kapil was not only the most successful fast bowler for India but perhaps the only genuine all-rounder to have played for the country. Batting at No. 7 he would provide strength to the lower middle order and play with the tail. Given the respect he earned as captain during his career, Kapil would also lead the side, ahead of the likes of MS Dhoni and Sunil Gavaskar.

With 619 wickets in a 132 test matches, Anil Kumble is the third highest wicket taker in the history of the game and the most successful Indian bowler of all time. If there was one thing that defined ‘Jumbo’, as he was popularly called, it was his hard work and consistency. He would keep coming hard at batsman, relentlessly, until he finally induced a false stroke. His lion-hearted effort of bowling with a broken jaw in Antigua in 2002 is still considered one of the giant efforts in the history of the game. Kumble never offered any freebies to the opposition batsmen and made a great career as a leg spinner who couldn’t turn the ball square! He is often cited as one of the greatest leg spin bowlers of all time.

A right arm off-break bowler, Erapalli Prassana makes it to the XI thanks to the variation that he would bring to the attack. A genius in his art, he was said to have out-smarted most of his victims. Some said he thought like a chess player before bowling his deliveries and, on many occasions, made his opponents appear foolish in their shot selection. Prasanna had complete control over flight and would toss the ball up to the batsmen inviting poor shots. Although 189 wickets in 49 test matches doesn’t quite match up to the records of other blowers in the team, Prassana makes it due to the phenomenal impact he had as a bowler at his peak.

With 311 scalps in a decade long career, Zaheer Khan is second on the list of wicket takers among Indian fast bowlers in test cricket. Being a left armer, he is the natural choice to open the attack with Kapil Dev. He would complement Kapil’s swing by hitting the deck hard and generating bounce and movement off the pitch in favorable conditions. Zaheer has always been a deceptive customer and his late swing and yorkers foxed the best batsmen of his generation.

A part of India’s legendary spin quartet, Bishan Singh Bedi would add a new dimension to India’s spin attack. 266 wickets in 67 test matches would make any bowler proud and the fact that he was a part of a four-pronged spin attack for most parts of his career is perhaps the best tribute to his skills at the top level. Opposition batsmen had to always be at the top of their game to counter Bedi’s art of deception. He was an aggressive bowler, who would challenge batsmen with flight and loop. It is said that Bedi could bowl a slow, fast or spinning delivery without much change to his action, which made him stealthy and difficult to pick.

And how can we not mention the cricketers who missed out narrowly, but would surely find a place in the 14 member squad.

The choice between Very Very Special batsman from Hyderabad and Vishwanath was tough as there was little to separate them. VVS played the best test knock for India (281 versus Australia at Eden, 2001) but Vishwanath is our choice as he faced better fast bowlers especially from West Indies and Australia with little protective gear in his heyday.

The best Indian XI won’t be able to accommodate two leg spinners and Chandra has to make way for Anil Kumble, whose career record and impact on the game is a shade better. However, he would make his way into them team if any of the spinners needed to be dropped or suffered from an injury.

The lion-hearted bowler, who was regarded as the best in business during the peak of his career, narrowly misses out to Zaheer with the latter adding variety to the seam attack being a left arm bowler. Srinath would earn a place in the squad if the team decided to play three fast bowlers instead of fielding three spinners.

P.S. – The entire line-up is made up of right handed batsmen and this may not test the line and length of the opposition bowlers. But this selection is based on merit and the only left handers who could have earned their place in the side, Sourav Ganguly and Gautam Gambhir, don’t quite bring in the same credentials as the others mentioned in the list.