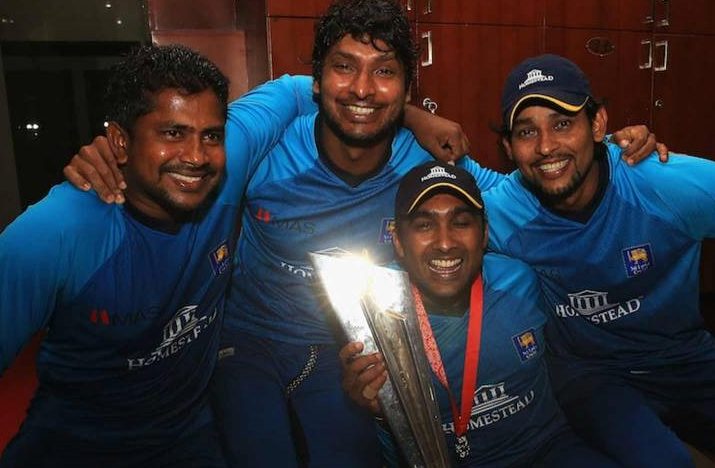 The Sri Lankan One Day International side can be easily divided into two eras. Before 1996, they were often regarded as ‘minnows’ who could cause occasional upsets but nothing beyond that. After their thrilling performance in the ’96 World Cup, which culminated with the title win, Sri Lanka became giants of ODI cricket. While test match success has often eluded the Sri Lankans, the same players transform into world-beaters in the shorter form of the game. With utility cricketers and an army of all-rounders, Sri Lanka has remained one of the best ODI teams in the world. Consequently, picking Sri Lanka’s Greatest ODI XI is no easy task, as they have produced some sensational talent over the years. So here is our pick of players who would be a joy to watch if they played together.

The mere mention of his name is enough to send shivers down the spines of opposition bowlers. There are great players and then there are some who rewrite all the rules. Sanath Jayasuriya belonged to the latter tribe. For a man who started his career as a slow left arm spinner, Jayasuriya redefined the art of batting in the first 15 overs and changed the way openers approach the game. He made fools out of bowlers and opposition captains with his strong wrists and explosive stroke play. With 13,430 runs, he is the fourth highest run getter in the history of ODI cricket and has 28 hundreds to his credit. With 328 ODI wickets, he is also one of the best all-rounders in this format and could regularly bowl 10 overs for his captain.

There are no prizes for guessing who would open the innings with Jayasuriya. Tillakaratne Dilshan belonged to the Jayasuriya School of Cricket with an added touch of elegance. He was relentlessly aggressive – irrespective of the conditions or the opposition. Like other cricketers from the island he was strong with his wrists and would together with Jayasuriya offer an explosive start to the innings. Dilshan invented the famous ‘Dilscoop’ and used it effectively in the second half of his career. With 10,290 runs, he is 11th in the list of top run getters in ODIs and the fourth Sri Lankan to go over the 10K mark. His average of 39.27 (with 22 hundreds) in a career spanning more than a decade is the perfect testimony to his batting abilities.

At No. 3 we have inarguably the best batsmen to have ever played for Sri Lanka. Kumar Sangakkara is one of the best batsmen in the history of the game and would walk into an all-time World XI based on his record. Stylish, elegant, artistic… we can run out of adjectives to describe this wicket-keeper batsmen. With 14,234 runs, he is the second highest run getter in the game’s history. He scored them at an average of 41.98 with 25 hundreds to his credit. He is also the most successful wicketkeeper in the history of ODIs with 482 dismissals in the record books. If this wasn’t enough, in his final five appearances he scored four hundreds on the trot making him the first player in the history of ODIs to do so. This was perhaps the most glittering end to a career in the history of the game.

Go back to the time when Sri Lanka were considered minnows and there was one batsman who would stamp his authority every time the islanders played. Sri Lankan fans owe a lot to de Silva for playing an important role in turning this team into world beaters. His memorable hundred during the 1996 World Cup final became a part of the country’s cricketing folklore and remains the only century in a final while chasing. One of the most aggressive batsmen of his era, he could cut and hook the fastest bowlers on green tops – a rare skill among batsmen from the sub-continent. Aravinda finished with 9,284 runs at an average of 34.90 with 11 hundreds. He also took 106 wickets and would offer his captain an additional bowling option on dry and dusty tracks.

The fifth highest run getter in the history of ODIs, Mahela Jayawardene is also one of the most classy batsmen to have ever played the game. His hand-eye coordination and those deft touches made him one of the best players to watch when in full flight. Jayawardene defied conventional wisdom, being strong through the cover region with minimal footwork. Following stroke makers earlier in the batting order, he would steady the ship for the team and play the role of a finisher in this side. For the record, Jayawardene scored 12,650 runs at an average of 33.37 with 19 hundreds and took 218 catches which is the highest in the game by a non-wicketkeeper.

Arjuna Ranatunga deserves a place in the team as much for his batting abilities as for his inspirational leadership. He is the best man to captain the side. After all, it was he who instilled strong self-belief in the minds of his team members before the 1996 World Cup. While his decision to walk-off with team members in Adelaide when Muttiah Muralitharan was called for chucking was criticized, it also showed the grit of a leader who was willing to do anything for his side. In this team of stoke makers Ranatunga would be the perfect batsmen to play the anchor role should there be a top order collapse. He scored 7,456 runs at an average of 35.84 with four hundreds to his name.

Batting at No. 8 may not do complete justice to a batsman who has an average of 40.82 in ODIs! But it’s difficult to find a place for Mathews given the legends whose wickets would bring him to the crease. Nonetheless, he would add strength to the lower order and play based on the situation of the team. His ability to capitalize on good starts and also manage top order collapse makes him an ideal candidate for this position. His 4,654 runs and 111 wickets make him one of the best all-rounders in the team. He can be pushed up the order to score quick runs and also bowl his full quota of overs for his captain.

No Sri Lankan fast bowler merits selection in the team ahead of the one and only Chaminda Vass. Perhaps the second best left arm fast bowler to ever play the game behind the legendary Wasim Akram, Vaas had the habit of picking early wickets. Playing most of his cricket on lifeless tracks, he made a habit of earning maximum returns from the dusty paths in the sub-continent. When he eventually lost pace, he derived the best out of his seam and swing bowling skills. His 8 for 19 against Zimbabwe is the only instance of a bowler claiming 8 wickets in a match and remains the best bowling figures to date. He is fourth on the list of top wicket takers and has claimed 400 scalps at an average of 27.53.

Ajantha Mendis made a sensational start to his career with even the best batsmen in the world having no answers to his mystery balls. The former Sri Lankan Army gunner soon became famous as the ‘mystery spinner’ and his finger flicked leg-breaks earned a new name the ‘carom ball’. Mendis eventually lost some of his effectiveness, as batsmen around the world started picking him, especially in Test Cricket. But in the 50 over format, he still remains a tough customer to deal with. In 87 ODIs, he has picked up 152 wickets at a phenomenal average of 21.86. He would undoubtedly make it difficult for batsmen in the middle overs bowling in tandem with Murali.

Undoubtedly one of the most effective fast bowlers in the 50 over format, Lasith Malinga has been as much of an enigma as a match winner. His devastating in-swinging yorkers, bowled with a round arm action, make him a tough customer to deal with. And his ability to pitch it up there ball after ball makes him truly destructive. Malinga is the only bowler in the history of ODI cricket to claim three hat-tricks and the only one at the international level to take 4 wickets in 4 balls, a feat he achieved against the South Africans in 2007 World Cup. With 295 wickets under his belt in 196 ODIs he would form a lethal new ball pair with Vaas.

Muttiah Muralitharan has been controversial throughout his career and often divided the cricket world into two – perhaps he nears Jardine in terms of his lovers and critics. But what can’t be taken away is the fact that he is one of the greatest cricketers to have played the game. There is no other off spinner in living memory who has been as successful as Murali in the game. It was often said that Murali could even turn the ball on a glass surface, such was his skill. With 534 wickets at a stunning average of 23.08 he is the most successful bowler in ODI history. In this team, Murali would be expected to pick up wickets in the middle overs and also contain the batsmen if the opposition were to get off to a brisk start.

While it wasn’t difficult selecting the playing XI, it was definitely tough leaving out a few legends who also earned many laurels for their country. Though they couldn’t make it to the first XI they definitely deserve a place in the squad and could fill in for injuries where needed.

Leaving out one of the most stylish openers in the history of the game was perhaps the toughest call. But for all his skills and record, Marvin Attapatu doesn’t merit selection ahead of Jayasuriya and Dilshan. But he would be the first choice replacement as an opener.

Upul Tharanga is one of the most entertaining batsmen of the modern era and played some phenomenal innings for the team. While he doesn’t make it to the first choice team he is surely one of the best people to warm the bench.

There are people who make the best out of their abilities and Nuwan Kulasekara surely belongs to this club. While he may not call for immediate selection in Sri Lanka’s best ODI side he certainly deserves his place in the squad.