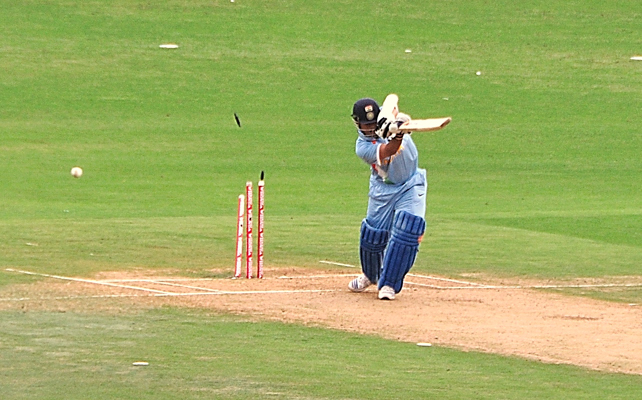 “I didn’t know you could ring India from South Africa,” said Jagmohan Dalmia when he received a call from Dr Ali Bacher, the boss of the United Cricket Board of South Africa, in 1991. Dalmia’s incisive point was well-made. After all, operating under a regime that advocated a form of white supremacy, the Proteas had never played against the dark skinned Indians, who had earned their independence from the white British Raj less than half a century earlier. But India paved the way for South Africa’s readmission into cricket after two decades of isolation by hosting them for a 3 match ODI series in 1991 – and thus began a great new rivalry in ODI cricket.

South Africa returned the favour, hosting India as the first team on their land in an ICC-recognised series in 1992 after having had to treat their fans to rebel tours for more than two decades. Right from the very first series, the Proteas established themselves as a power packed unit immensely difficult to beat on home soil. In the years since, South Africa has not been a happy hunting ground for the touring Indians.

As Virat Kohli and his men prepare for the African safari after two impressive seasons in the sub-continent we rewind and take a look at the past bilateral series between the two sides played in South Africa.

Millennials would probably find it surprising that in the past bilateral ODIs were often sandwiched between a long Test tour. After drawing the first two test matches in the 4 match series during the famous Friendship Tour, India played 7 ODIs against the South Africans.

The first encounter at Cape Town went down to the wire. Batting first, India made a mess scoring only 184 after Jadeja and WV Raman had added a 92 run opening stand. Hansie Cronje with his military medium pace ran through the India batting order with a career best 5 for 32. In reply, India’s disciplined bowling meant that the hosts struggled with their chase winning with 3 balls to spare. Peter Kirsten top scored with 56.

The second ODI at Port Elizabeth saw another batting collapse from the visitors as they were bowled out for 147 runs with WV Raman top scoring with 33. Brian McMillan, with 4 for 32, was the chief destroyer. But the Indian bowlers made the South Africans struggle and took the innings to the 47th over where Dave Callaghan and Cronje sealed it for the home side with patient knocks.

In the third ODI at Centurion South Africa batted first and made 214 for 5 on a lively pitch with opener Andrew Hudson top scoring with 87. In reply, India chased the total with 5 balls to spare and 4 wickets in hand and WV Raman scoring his maiden ton which would also remain the only one in his career.

The teams moved onto Johannesburg for the fouth ODI and it was going to be another low scoring encounter. The Indians made 161 for 9 in their 50 overs with skipper Azharuddin notching 49, while Donald took 3 for 27 for the home side. In reply South Africa reached the target with 6 wickets in hand and 9 balls to spare with Jonty Rhodes making 42 their top score.

In the fifth ODI at Bloemfontein, the South Africans put the Indians into bat and restricted them to 207 for 4 with Azharuddin scoring 86 playing a captain’s innings. In reply the hosts chased the target down loosing 2 wickets and Andrew Hudson scoring a brilliant 108 and capturing an unassailable 4-1 lead.

The sixth ODI at Durban saw the hosts bat first and they made 216 for 8 with skipper Wessels top scoring with 78 and Kapil Dev bowled impressively to take 3 for 23. In reply, the Indians were bowled out for 177 runs with none of the batsmen converting their starts into a big score.

With their pride at stake, the Indian team brought up an impressive show in the last ODI at East London. They reduced the hosts to 203 for 8 thanks to some tight bowling. India chased the target with 16 balls to spare and Prveen Amre top scored with 84 runs. The series was comprehensively won by the hosts 5-2.

The Rahul Dravid-led Indian team arrived in South Africa for a long tour and kick started the series with a 5 match ODI tournament. The first ODI at Johannesburg was washed out without a ball being bowled.

In the second ODI at Durban the South Africans batted first and put up 248 for 8 with Kallis top scoring with 119 runs. In reply, the Indians lost wickets at regular intervals and were bowled out for just 91, leaving the hosts with a comfortable 157 run victory.

Cape Town hosted the third ODI and the South Africans, batting first again, had a disastrous start being reduced to 71 for 5; however, they managed to recover and pile up 274 with Justin Kemp scoring a superb 100 not out. Indians began disastrously and finally folded up for 168. Shaun Pollock was the destroyer, taking 4 for 28, and ensured a 106 run win for his team.

The fourth ODI at Port Elizabeth didn’t see the script change much as South Africans scored 243 for 8 with Herschelle Gibbs making 93. The Indian team failed to impress again with their innings getting wrapped up for 163.

The fifth ODI aroused little interest and here, too, the Indians failed to impress. Batting fist they barely managed 200 runs with Tendulkar’s 55 the only meaningful contribution. The South Africans chased it down losing just one wicket as de Villiers made an impressive 92. This meant that India’s suffered a 4-0 white wash one of their worst performances abroad.

With the test series levelled 1-1 the Indian team under ‘Captain Cool’ MS Dhoni went into the series with great confidence. In the opening ODI at Durban the hosts batted first and put on 289 for 9 with Duminy and AB de Villiers scoring 73 and 76 respectively. Sadly for India their improved test performances didn’t carry over into the One Day arena. Apart from Virat Kohli, who scored 54, no other Indian batsmen could make a serious contributions as Lonwabo Tsotsobe took 4 for 31 and earned his side a massive 135 run victory.

The second ODI at Johannesburg proved to be a thriller. India batting first made 190 runs with a solid 53 from Yuvraj Singh. In reply, the South Africans fell short by just 1 run, despite an excellent 77 from skipper Graeme Smith. Munaf Patel was the hero, claiming 4 for 29 to win it for India.

In the third ODI at Cape Town the Indians reduced the hosts to 220 runs with du Plessis top scoring with 60. The Indians were struggling desperately at 93 for 5 before Yusuf Pathan scored 59 to earn a victory by 2 wickets with 10 balls to spare.

In the fourth ODI at Port Elizabeth the South Africans posted 265 for 7 with JP Duminy top scoring with 71 runs. In reply Indians were 142 for 6 despite Kohli’s unbeaten 87 when rain came in and helped South Africa register a 48 run with by the Duckworth–Lewis method and the series was levelled at 2-2.

The decider fifth ODI was played at Centurion and saw the hosts come out firing. The Proteas put on 250, led by Hashim Amla’s delightful 116. With rain affecting the game the South African innings was reduced to 46 overs and the Indian target was revised to 268. Despite a wonderful century from Pathan, the Indians were bowled out for 234, thus South Africa won the match by 33 runs and the series 3-2.

The World Champions India kicked off their 2013-14 tour to South Africa with a three match ODI tour. Despite the fact that this would be the first ODI tour without the services of Sachin Tendulkar, who had been a constant name since the country’s first visit to South Africa, MS Dhoni and his team felt confident of success. The hosts had other ideas, though, and they proved it in the first ODI at Johannesburg. Batting first the South Africans milked the Indian bowling and amassed a monstrous 358 with Quinton de Kock scoring 135. In reply, the Indians surrendered at 217 handing a 141 run win to the hosts.

The script didn’t change much in the second ODI at Durban where the hosts set India a victory target of 281 runs thanks to hundreds by both the openers Amla and de Kock. In reply Indians castled out for 146 runs with Lonwabo Tsotsobe picking up 4 for 25 runs to seal the ODI series 2-0.

The third ODI at Centurion wasn’t looking any better for India after the hosts put 301 on the board with de Kock scoring his third consecutive hundred and skipper AB de Villiers also chipping in with a ton. The Indians were spared a very difficult chase by heavy rain which prevented a result. Thus the series ended at 2-0 in favour of the South Africans and India’s dream of an ODI series win in South Africa remained unachieved.

Under an aggressive Virat Kohli, India will be looking to overcome history and win the first bilateral ODI series in South Africa in 2018. It will be an enthralling contest between the top two ODI sides in the world as per the ICC ODI rankings. For Virat, who has been in the form of his life for the last two years and led from the front, it will be his first big challenge after taking over from MS Dhoni as the limited overs captain. But Faf du Plessis and his men aren’t likely to surrender their ODI crown without putting up a fight. The five match series promises to be a cracker of a contest.