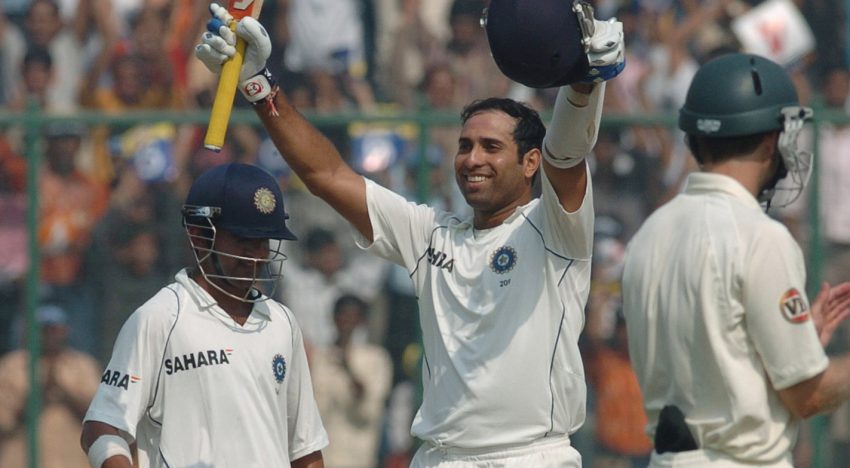 The Indian Cricket Team has always been regarded as a batting powerhouse and has throughout its glorious history has produced some of the best batsmen to have ever played the game. In its 85 year record as a team, many individual performances have stood out and entered record books. As the current team holds the ICC Mace for being the #1 ranked test side in the world we look back at some of the best individual batting performances that have become a part of Indian Cricket’s folklore.

India had won the first test match of the series at Hamilton comfortably but the home side came hard at them in the second encounter. Batting first, New Zealand scored a mammoth 619 and bowled out India for a mere 305, asking them to follow on the last session of the third day. With two full days to go India were still 280 behind and, with Virender Sehwag already gone, the visitors had their task cut out. For the next two days Gautam Gambhir stood like a rock and played a marathon innings of 137, facing 436 balls and occupying the crease for 647 minutes. For a team that has always carried the tag of ‘poor touring party’ on fast and seaming pitches, it was statement of sorts. Gambhir stood tall when the occasion demanded, dousing all the missiles fired at him by the Kiwis and earned a draw. With the next test drawn India registered its first series win in New Zealand in 50 years!

It wasn’t often that Sir Donald Brandman’s batting efforts would be transcended in any game especially when he scored a double hundred. But in the summer of 1947/48, on India’s first tour to Australia, Vijay Hazare produced an innings that has since become a part of Indian cricket folklore. Going into the fourth test match India were 2-0 down and the home side had made 674 in the first innings, with Bradman scoring 201. In reply, India stitched together 381 with Hazare scoring 116. Asked to follow on, Hazare came to bat with the team at 0 for 2 and played one of the most memorable knocks in a losing cause, scoring 145 against a quality Australia attack. He made more than half of India’s team total of 277 in the second innings, becoming the first Indian to score a ton in each innings of a test match, but unfortunately he couldn’t prevent a defeat. Paying tribute to this knock, the great Don Bradman said Hazare was among the most accomplished batsmen to have ever toured Australia.

In a ground where he established himself as a teenage sensation 12 years earlier, Sachin Tendulkar would play his finest test knock. Going into the fourth and final test of the series, Sachin had scores of 0, 1, 37, 0 and 44. He had consistently struggled playing drives to bowlers in the series and this accounted for most of his dismissals. In an innings where he showed an extreme display of control and quality shot selection, the ‘Master Blaster’ didn’t play a single drive in front or back of the covers throughout his 241 run knock. He remained undefeated and demoralised the opposition. More than three-quarters of his runs came on the on-side – remarkable for a player whose drives through the covers are still lauded by coaches around the world. Tendulkar’s efforts meant India reached a mammoth 705 in their first innings making Australia follow-on. The Australians escaped with a draw thanks to stubborn batting by Steve Waugh in his last test innings, but Tendulkar’s herculean knock is not one that should be forgotten.

Gundappa Vishwnath is inarguably one of the most stylish batsmen to have played for India and the magical innings he played in April, 1976 against the West Indies at Port of Spain is still fresh in the memory of die-hard Indian fans. Batting second, the Indians had conceded a lead of 131 runs with Viv Richards having smashed the Indian attack in the first innings with a fiery 177. A little overconfident, the West Indies declared at 271 for 6 in the second innings, setting the Indians a target of 403 which most believed would be out of reach for the visitors. Vishwanath produced 112 in a well-crafted innings and helped India win the match by 6 wickets in what was the first instance of a 400-plus score being successfully chased in the fourth innings of a test match. Interestingly, this test would also be remembered as a rare instance in the 1970s when West Indies fielded 3 spinners!

Despite critics doubting his temperament, by the time he hung up his boots, Virender Sehwag had cemented himself as one of the most successful openers in Test cricket history. In the first test of India’s historic tour to Pakistan in 2004, Sehwag played a sensational innings to score the first triple ton by an Indian and help his team win by an innings and 59 runs, thus earning the title of ‘Multan ka Sultan’ or Prince of Multan. It wasn’t his score that made the elite Pakistani attack (comprising stars Shoaib Akhtar, Mohammad Sami and Saqlain Mushtaq) look school-boyish, but the fact that he scored his runs at an incredible strike rate of 82. Sehwag reached his triple hundred in style by hitting a maximum off Saqlain Mushtaq, which perfectly encapsulated his no-fear approach to the game. During the course of the innings Viru hit 39 fours and six sixes.

While the 2001 Test Match against Australia is often remembered for VVS Laxman’s 281, many people tend to forget the efforts put in by Rahul Dravid. ‘The Wall’ scored 180 and was involved in an historic 376 run partnership that vaporised Steve Waugh’s dream of conquering the ‘Final Frontier’. Dravid wasn’t in the best of form going into the test match and was batting at No. 6, which was unusual for a man who was in the habit of holding one end up for his team. He batted for almost 7 hours, carried his bat through to the fourth day along with Laxman and the rest, as they say, is history. Many legends were born out of this test series and through this knock – against the best attack in the world – Dravid established his reputation as one of the best batsman to have ever played the game.

Sunil Gavaskar’s 221 at The Oval almost took the Indians to a memorable win. Needing 438 in the last innings to win, the match ended in a draw with the visitors on 429. Some say Sunny’s efforts would have been regarded as the best test innings ever played had the Indian team won that game. Batting first, the Englishmen made 305 before they bowled India out for 202. In the second innings, the Englishmen scored 334 setting India an extraordinarily difficult task to achieve in the last two days of the match. India started well with Gavaskar and Chetan Chauhan putting on 213 for the first wicket. A middle order collapse and some deliberate attempts by the English captain to slow down the over rate denied India an unimaginable win. But Gavaskar’s long and impactful innings earned him great praise from all quarters. He played a near chance-less innings and was always in command, until a lapse of concentration in the last session got the better of him.

When Dilip Vengsakar stepped out to bat at Lord’s in June of 1986, he was a ton away from being the first overseas batsman to score three centuries at the ‘Mecca of Cricket.’ England batted first and scored 294 in what were extremely difficult batting conditions, with the ball swinging and seaming sharply. Riding on Vengsarkar’s classy knock of 126, India took an important lead of 47 runs in the first innings. Kapil Dev’s inspiring spell reduced England to 180 in their second innings, which meant the Indians needed 134 to win the test match, which they compiled comfortably with 5 wickets in hand. This was especially significant, as it was India’s first win at this historic ground. Vengsakar had an awesome tour where he scored another ton at Leeds and became the #1 ranked batsman in the world for almost a year. 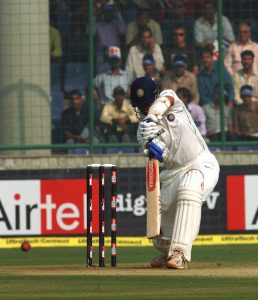 Dravid blasts another shot through the covers

It isn’t surprising that Rahul Dravid makes it onto our list again. When India had its back against the wall, ‘The Wall’ stood tall and played one of the best innings ever by an Indian on foreign soil. Dravid’s incredible knock earned India one of its most memorable victories abroad. The Australians batted first and piled up 556 runs, then had the visitors reeling at 84 for 4. This is when VVS Laxman came into partner Dravid and stitched up a 303 run partnership taking India to 523. In the process, the relentless Dravid brought up his first double ton against Australia. Ajit Agarkar’s magical spell meant that the Aussies were bowled out for 196 in the second innings, setting the Indians a target of 230. Dravid played a calm and composed innings of 72 to steer his side to victory, hitting a boundary to seal the win and ensuring his country secured a rare lead Down Under.

It is often described as an innings that changed Indian cricket forever. Before this epic effort, the Indian team had a long history of buckling under pressure. However, following VVS Laxman’s 2001 heroics, the Indians have become renowned for facing challenges head-on. Steve Waugh’s Australian team landed in India with a near ‘Invincible’ tag and won the first test in Mumbai comfortably. In the second match at Eden Gardens they forced the Indians to follow on with a deficit of 274 runs. The Very Very Special Hyderabad batsman who had top scored in the first innings was promoted to No. 3 and played one of the best innings in the history of the game. Laxman and Rahul Dravid put up 376 for the fifth wicket with the duo denying the Aussies a wicket for the entire fourth day. Laxman’s 631-minute innings contained 44 hits to the fence and set up a remarkable win for India – only the third instance of any team winning a test match after following on. Laxman’s knock has since been voted by Wisden Cricketers’ Almanack as the best ever innings by an Indian – and it’s hard to imagine a challenger emerging any time soon.