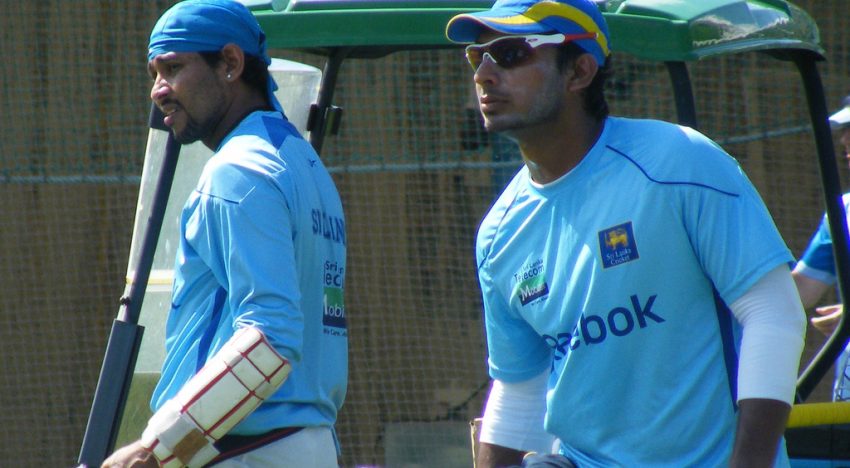 Sri Lanka may have one of the smallest cricket playing communities in the world, but they have produced some of the best cricketers in the 50 over format of the game. Though the game was introduced to the island around the same time as it was in India (Pakistan included in that era), it would take the Sri Lankans some additional time to join their other South Asian counterparts in the top league. After being pushovers for most of their formative years in International Cricket, the Sri Lankans surprised everyone to lift the 1996 World Cup played in the sub-continent.

There was no looking back after that as the nation was bitten by the ODI bug. Talent started coming from all corners of the country and Sri Lanka became one of the best sides in the world. Though the team hasn’t been consistent when playing abroad (much like their other counterparts from Asia), they have produced some true giants of the 50 over game. Here we take a look at some of Sri Lanka’s Best One Day International players of all time.

At No. 15 we have Nuwan Kulasekara, the medium pacer – and quite a handy batsman in the lower order. While Kulasekara had some challenging periods during his career, he made a habit of picking wickets when his team needed them the most. With 199 wickets in 184 games he is fifth highest wicket taker for his side in ODIs and did so at an average of 33.92 with one five wicket haul and 4 four wicket hauls. With the bat he made 1629 runs which included 4 fifties, an effort that would make any lower order batsman proud.

Russel Arnold would surely be rated among the most street-smart cricketers to have played the game for Sri Lanka. He forged a remarkable habit of moulding his game based on his team’s need. He could hit from the word go or hold the fort together when the top order had failed, and was the best No. 6 the Islanders had for a long time. At his best while chasing, Arnold played many cameos that helped his side win closely fought encounters. In 180 games he scored 3950 runs at 35.26 which included one hundred and 28 fifties. His right arm off-breaks also offered an additional option for the captain as he claimed 40 wickets in his career.

Though his batting average of 29.49 may not impress modern followers of the game, Roshan Mahanama was one of the most dependable batsmen for his side during their formative years in international cricket. A stylish right handed batsman, he took upon the role of calm and composed middle-order stalwart and was perhaps Sri Lanka’s best in alien conditions. When most of his teammates struggled on fast and seaming pitches, Mahanama brought out his best game and steadied the ship in the most challenging environments. In 213 matches he played for the country, he made 5162 runs which included 4 hundreds and 35 fifties.

‘Kalu,’ as he was fondly called by his teammates, always played in the shadow of stars like Jayasuriya and D’Silva, but the short wicketkeeper batsman made giant contributions during Sri Lanka’s golden ODI run that saw them win the 1996 World Cup and dominate the game for the next couple of years. Not blessed with the best technique, Kaluwitharana played the role of an explosive opening batsman during that period and, along with Jayasuriya, often sealed the opposition’s fate in the first 15 overs of field restrictions. In 189 games he made 3711 runs at an average of 22.22 with 2 hundreds and 23 fifties. He also took 93 catches and effected 23 stumpings in his career.

Like his Test career, where he scored 5 ducks and a one in his first three test matches, Marvan Attapatu’s ODI career got off to a rocky start. He scored 53 runs in his first 8 batting appearances and never really looked making the cut. After playing 8 games in 6 years, Attapatu finally sealed his spot in the Sri Lankan line-up with a great comeback. The antithesis of Jayasuriya, he soon became one of the vital components of the team playing the role of a sheet anchor. If others around him were flamboyant Attapatu was calm and composed. He played many critical innings for the Sri Lankans during his 268 games, making 8529 runs at an average of 37.57 which included 16 hundreds and 17 fifties.

Angelo Mathews is one player any captain would love to have in his side. Not blessed with the most natural talent, he has obviously worked extremely hard to become one of the most dependable cricketers for his side with the bat and the ball. An ideal prospect in any line-up, Mathews has so far scored 5017 runs at an average of 41.86 in 196 games with 2 hundreds and 35 fifties to his name – not bad for a man who bats in the lower middle order. He has also picked up 114 wickets at an average of 34.21 with one five wicket haul to his credit. Mathews defines athleticism and surely belongs to the utility club of ODI cricketers.

You don’t pick up three hat-tricks in ODIs by fluke; you have to be special and this man from Sri Lanka with his unique round-arm action is the definition of special. Known for his pomp and swagger, Malinga is one of the most dangerous customers to face in the history of the game. He can bowl fast inswinging yorkers to batsmen at will and this has made him one of the most destructive bowlers in the death overs. In a long career, where he has overcome many injuries, Malinga has picked up 301 wickets in 204 appearances at an average of 28.92, which include 7 five wicket hauls and 9 four wicket hauls. He is the only bowler in the history of the game to pick up four wickets in four consecutive deliveries, a feat he achieved against the South Africans.

His potbellied structure made him look like anything but a sportsperson, but Arjuna Ranatunga has undoubtedly been one of the best cricketers to have represented his country. Though he may not have been most stylish or destructive batsmen, he was among the mainstays in the middle order for most of his career. What Ranatunga is best known for is his captaincy skills. He famously took his team to the 1996 World Cup title, turning a team of bits-and-pieces players into well-oiled machine, which ultimately annihilated opponents. In 269 games, he notched 7456 runs at an average of 35.84 which included 4 hundreds and 49 fifties. A handy medium pacer, he also took 79 wickets in his career.

More than a decade after his retirement from the game, Chaminda Vaas remains the best fast bowler to have played the game for Sri Lanka and arguably the second best left arm fast bowler the world has seen, behind the legendary Wasim Akram. The spearhead of the Sri Lankan team for much of his career, Vaas had a remarkable ability to snatch wickets early in the game with his teasing line and length. In 322 ODIs Vaas claimed 400 wickets at an average of 27.53 with 4 five wicket hauls and 9 four wicket hauls. His 8 for 19 against Zimbabwe remains the best bowling figures in ODIs and the only instance of a bowler picking up 8 wickets in a game.

An explosive opener, Dilshan is rated among the most destructive batsmen the world has seen. A natural timer of the ball who could bring his wrists to play, he was feared by bowlers around the globe. At his best, Dilshan could single-handedly crush the opposition and set a perfect platform for his team to win games. He would hammer the bowlers from the word go and seldom resorted to defensive techniques. In 330 ODIs that he played, Dilshan plundered 10290 runs – only the fourth Sri Lankan to cross the 10K mark. His average of 39.27 was excellent for an opener as he scored 22 hundreds and 47 fifties. Also a useful off-break bowler, he claimed 106 wickets in his career.

Aravinda de Silva emerged as the first batting star for the island nation; one who could stare into the eyes of any opposition. Early in his career, he was the most feared batsmen in the team and often played single-handedly as others around him struggled. He became Sri Lanka’s most prolific middle-order batsmen and also captained the team for a long portion of his career. His century in the finals of the 1996 World Cup, which helped his side beat the Aussies, stays etched in the memory of Sri Lankan fans. In 308 ODIs Aravinda scored 9284 runs at an average of 34.90 which included 11 hundreds and 64 fifties. He also bagged 106 handy wickets.

The former Sri Lankan captain was one of the best middle order batsmen to have ever played ODI cricket. For a man who struggled with consistency in the first half of his career – and was often accused of throwing his wicket – he ended his playing days as one of the world’s most reliable accumulators of runs. Jayawardene is an oddity in this line-up full of stroke makers, a batsman who liked working his singles and twos in the middle. In a career that saw him play 448 ODIs (the second highest in the world behind Tendulkar), he scored an amazing 12650 runs, the fifth highest total ever, at an average of 33.37 with 19 hundreds and 77 fifties. He also took the most catches in the history of the game for a non-wicketkeeper with 218 to his credit.

Not many would have predicted Muttiah Muralitharan to go as far as he did after he was called for chucking multiple times in his career. By the time he hung up his boots after Sri Lanka’s loss in the finals of the 2011 World Cup, he was the highest wicket taker in the history of the game with 534 scalps at an average of 23.08. His domination emphasised by the fact that he claimed 10 five wicket hauls and 15 four wicket hauls in his career. Murali was one of the toughest competitors in the game and unarguably among the greatest turners of the cricket ball. With a smile on his face he foxed the best batsmen in the world with his sharp turn and the famous Doosra.

What do you call a man who scored four centuries in his last five ODI games? ‘Legend’ would be the right word, but many Sri Lankan fans are rightfully angry that Kumar Sangakkara is rarely considered in the same league as Lara, Tendulkar or Ponting by the pundits of the game. But Sangakara, who is studying to be a lawyer, brought the same articulate style to his batting as a seasoned lawyer would use to argue his case. There was a classiness written all over his approach and yet he scored at a brisk pace. Playing 404 games he finished with 14234 runs at an average of 54.19 which makes him the second highest run scorer in ODI cricket history. These runs included 25 memorable hundreds and 93 fifties. No slouch as a keeper either, he had an impressive record behind the stumps with 182 catches and 20 stumping.

When we talk of Sri Lankan ODI players, there is no one who comes close to this soft spoken yet brutal opener. Sanath Jayasuriya hasn’t scored the most runs for his country nor taken the most wickets, but if there is one player who can be credited for making Sri Lanka a powerhouse of ODI cricket it has to be this man. The Player of the Tournament in their 1996 World Cup win, his presence at the crease genuinely scared even the best opposition bowlers. He is the most successful all-rounder in the game and the only one to cross the combined 10000 runs and 300 wickets mark. In 445 ODIs he scored 13430 runs at 32.36 with 28 hundreds and 68 fifties. He also snared 323 wickets at 36.75 (which included 4 five wicket hauls and 8 four wicket hauls), leaving little doubt as to his status as a true legend of One Day cricket.