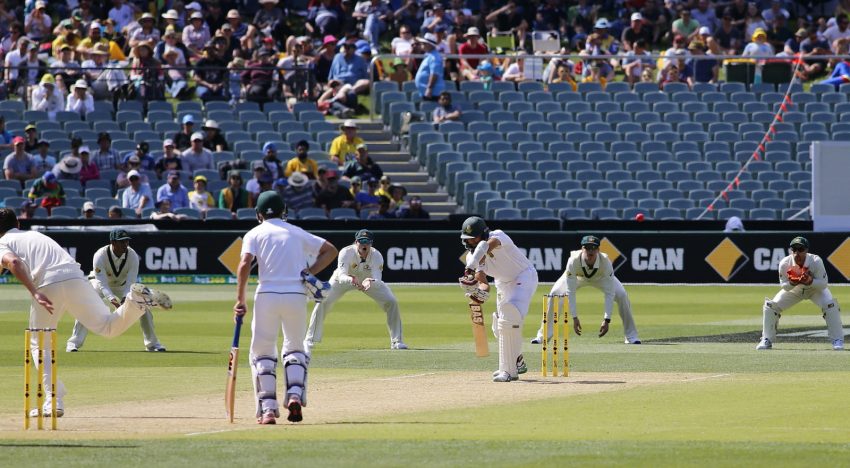 South Africa have always had a formidable bowling attack. Often the Proteas would skittle batting orders and then have to come out and face the music themselves, a lot of the time on green, fast and bouncy test wickets. This is the list of the batsman that were able to negotiate the swinging Kookaburra whilst others where falling around them. To be a successful batsman in South Africa you needed many bows to your arrow. Here are the 10 that stood out and were able to be called upon when asked.

Daryll Cullinan seems to divide opinion these days. His outspoken nature and scathing reviews of Proteas players and coaches have isolated him from the current national setup. When you put that to one side and take a closer look at his test career, you realize that Cullinan was no ordinary player. In 70 test matches, Cullinan scored 4,554 runs at an average of 44.21. He scored 14 centuries and 20 fifties and currently sits at number 8 on the all time leading test run scorers for the Proteas. That’s an impressive record no matter how you look at it, but when you ask South African fans and indeed international cricket fans, they will tell you it was the way in which Cullinan scored his runs. Graceful, elegant and watchful, he was a classic test batsman.

The current Proteas captain is still playing, but deserves his place in this list for some of the most hard fought test innings you are ever likely to see. Du Plessis has played 40 test matches and scored 2,426 runs at an average of 44.92. In those 40 games, he has notched 6 centuries and 14 fifties. The man from Pretoria epitomises what test cricket is about and has breathed life into the purist fans, who base their love of test cricket on guts, determination and a never-say-die attitude. There is no better example than Du Plessis’s debut in 2012 against Australia in Adelaide where South Africa were in a heap of trouble at 45-4 and staring down the barrel in the 4th innings. Needing to bat out a day and a half, Du Plessis withstood all the mighty Australia could throw at him. In one of the greatest escapes of all time, Du Plessis was out there for 466 minutes, he faced 376 balls and made 110 runs to salvage a draw and help the Proteas win another test series away from home.

Bruce Mitchell didn’t miss one of South Africa’s 42 test games between 1929 and 1949. That stretch of 42 tests was how many Mitchell played in a glittering career for the Proteas. He scored 3,471 runs at an average of 48.88, amassing 8 centuries and 21 fifties. Mitchell’s test stats are even more impressive given the fragility of South Africa’s batting line up at the time. He had an enormous weight on his shoulders every time he came out to the middle. If there was ever a telling stat that showed how big a price he put on his wicket it is this one – that he only hit one six in his entire 42 tests. None the less, he didn’t just soldier on, he excelled. Bruce Mitchell showed unbelievable longevity and unmovable patience. A gentleman on and off the field, Mitchell was a fine ambassador for South African test cricket.

Herschelle Gibbs was one part of the most successful pair of opening batsmen South Africa has seen. The talented right hander has developed a reputation for being a maverick and entertainer. Whilst this is all true, it cannot be forgotten that for close to 90 tests Gibbs opened the batting in the longest and purest form of the game. You simply cannot be a fly by night batter or character to do it for that long and enjoy the success he did. You need determination, application and patience, of which Gibbs had plenty (even if up until a point). His strike rate of just above 50 shows you he applied himself for the team. Of course with a talent such as Herschelle Herman Gibbs’, he could turn on the flair in a moment’s notice. In 90 tests Gibbs scored 6,176 runs at an average of 41.95, including 14 centuries and 26 fifties. A frightening sight for any bowler once he was in, Gibbs would either grind or thrill to perfection.

The partnership that Gary Kirsten formed with Herschelle Gibbs helped the Proteas win many games. Kirsten was the picture of patience. Possibly not as talented as others, Kirsten applied himself and batted responsibly but also timed the ball to perfection. Once in, he developed into a more natural stroke player and grew in confidence. He could play all around the wicket and possessed a beautiful late cut that often beat backward point and raced off to the boundary. In 101 games he scored 7,289 runs at an average of 45.27, notching up 21 centuries and 34 fifties.

Late in his career, Kirsten was going through am awful run of form and was given one last test to prove himself before the axe would fall. It was 1999 during the boxing day test against England in Durban. He failed in the first innings and was dismissed for 11. Having to follow on and save the game, Kirsten was facing the gallows. In an unthinkable turn of fate, he went on to show the biggest act of defiance and courage. Facing 642 balls and staying out there for 878 minutes, Gary Kirsten saved his career by scoring 275 runs. An innings that will never be forgotten and will go down in South African cricket folklore.

Graeme Pollock suffered severely at the hands of international sporting sanctions against South Africa. He only ended up playing 23 times and almost every time he did he brought the house down. He scored 2,256 runs at an astonishing average of 60.97. This included 7 hundreds and 11 fifties. He had a highest test score of 274, which stood for many decades as the loftiest by any South African. It seems unfair to say that one could only predict what would have happened had Pollock had an uninterrupted career. Form dwindles after about 10 games, you can’t get to 23 tests still averaging 60 and wonder if he would have carried on this prolific form. The absolute answer has to be that Pollock would have gone on to become the world’s best test batsman of his era. Looking at it from another angle we can be grateful that the world at least got to see him play – even if it was only 23 times – for Graeme Pollock was the very best South Africa had seen up to that point.

Like anything AB de Villiers does in a Protea shirt, he excels as a batsman. His record with the willow in the longest format is exceptional. In 106 tests he’s scored 8,074 runs at an average of 50.46. He currently sits third in the all time leading test run scorers for South Africa. His highest of 278 not out against Pakistan in Abu Dhabi was a batting masterclass as he flayed a very good attack on a wicket that was turning sideways. De Villiers is such a consistent performer that he very rarely fails at the crease. When you average 50 in the test arena after 100 games you know you have made it.

It took only 16 first class games for de Villiers to be picked for the Proteas in 2004. Thirteen years later he has gone to a hundred 21 times and a fifty on 39 occasions. He has entertained over his career and played some of the finest knocks the world has seen. If he had batted up the order you could probably add on another two thousand runs. He will certainly leave an unfillable hole in the batting line up when he eventually decides to call it a day.

After Hashim Amla’s first test match had ended the sharks began to circle. The media smelt blood and could sense an early kill. His technique was crucified as they all chimed in together and confidently said the boy from Durban will never cut it at international cricket. We are now 13 years down the line from when those articles were written and Amla has 8,000 Test runs to his credit. He has gone on to represent the Proteas 103 times and has scored 26 hundreds and 32 fifties. He also holds the honour of having made the highest score of all time in tests for the Proteas; his 311 not out against England at the Oval in 2012 was an innings that no South African would ever forget. As he faced up on 299 with Tim Bresnan steaming in, one would have thought he would clip it away for one, taking all danger out of the equation. Instead, Amla thumped it over the infield for four as a desperate attempt from cover to take the catch ended in vain. That moment was one that still brings goose bumps and a lump in the throat to any Proteas fan. It also sums up this incredible silent warrior: brave, outgoing, flamboyant and committed. South African cricket will forever salute Hashim Amla for the invaluable service he has given.

It is not often that a mountain of a man has the same size personality and character, but Graeme Smith did. The greatest test captain South Africa (and possibly the world) has seen had to front up at a young age. Given the test captaincy at 22, there was no where to hide. Smith didn’t shy away and instead came out bullishly (much like his batting style) and dispatched the criticism and naysayers with disdain. In 117 games he scored 9,265 runs at an average of 48.25 with 27 hundreds and 38 fifties. To understand just how good Smith was, one has to realize that Smith opened the batting in the hardest conditions in the world. There is a reason visiting teams to South Africa get bullied and beaten when batting. The ball swings, bounces, moves in the air and comes at you at a frightening pace. It is the hardest job in world cricket yet Smith took the bruises, bouncers and wounds and came out on top. He is 2nd on the list of all time leading run scorers. With the willow in hand, the imposing Smith protected his side by any means necessary, taking the attack to the bowlers and getting opposing teams to change their strategy. Mike Tyson’s famous quote helps one understand Smith and the impact he had, ‘everyone has a game plan until you get punched in the mouth’. Well, Smith punched teams in the mouth all the time. In 2012, Smith finally got his reward as he led South Africa to the summit of the ICC test rankings.

If opening the batting in South Africa is the toughest job in world cricket, coming in to bat at number 3 is the second. Early wickets are a common feature on tracks in the rainbow nation. For a lot of his career, Kallis would be putting on his first cup of tea in the change room ready to watch the opening pair battle it out until lunch when the unmistakable collective drone of a home crowd could be heard as a wicket fell in the opening over. When the burly shape of Jacques Henry Kallis made his way out of the tunnel and onto the field during these times, one knew everything would be okay. In 166 test matches, Kallis scored 13,289 runs at an average of 55.37. He amassed 45 hundreds and 58 fifties. He is the leading run scorer for South Africa and third on the all time test list, just behind Messrs Ponting and Tendulkar. For 18 years Kallis didn’t stop making runs. Even in foreign conditions and away from home, you could count on Jacques Kallis. It is not often you can attribute a team’s success to one person, the closest you will get to an honest example is in the case of Kallis. He held the South African test team together and, with every run off his blade, instilled a confidence and self belief in those around him. Truly a once in a lifetime cricketer, we will never see the likes of ‘King Kallis’ again.