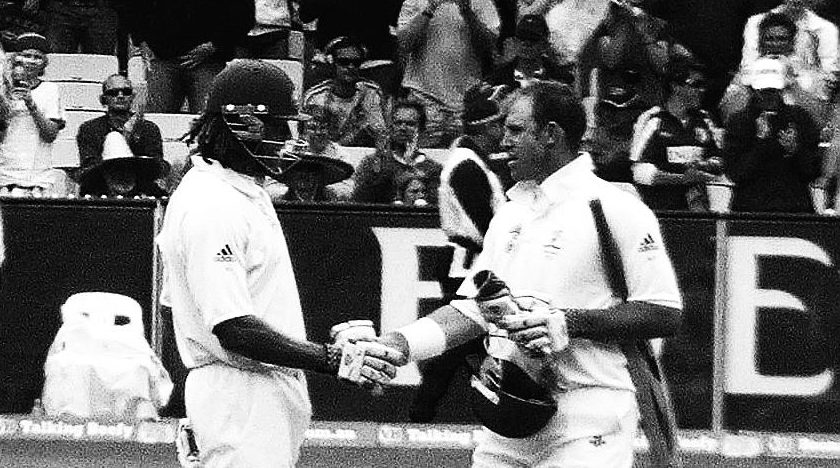 Test cricket has seen its share of late bloomers, but if we were to choose the best among the lot in the past few decades the name Matthew Lawrence Hayden (or ‘Haydos’ to his teammates) would surely top the list. Making his debut at the age of 23 he failed to impress critics initially. Australia was booming with talent and it wasn’t easy for the big man to establish himself at the top of the order, with the likes of Mark Taylor and Michael Slater having cemented their places. For the next seven years, Hayden would be in the wilderness, scoring big for Queensland, but failing in his sporadic appearances for the national side.

That changed in the winter of 2001 as Steve Waugh’s side, which was being seen as the new ‘invincibles’ of world cricket, toured India. The Indians probably wouldn’t have spent much time worrying about Hayden, considering he was sharing the dressing room with the Waugh bothers, Slater, Ricky Ponting and Adam Gilchrist. But by the end of the tour, the 30 year old Hayden had offered glimpses of what was to come. His mighty build was enough to scare the opposition, but it was his ability to knock the cover off the ball that made him special.

The next five years saw Hayden compile a remarkable 1000+ runs per annum. With him at the crease, Australia never looked out of contention even in the toughest of conditions. He scored all over the world, in all conditions, and helped his side retain the ‘numero uno’ tag for most of his playing career. In this feature we look back at ten of his most memorable knocks in Test cricket.

Before this Test Match Hayden had made 13 appearances for Australia in the whites over a period of 7 years. While his talent at the domestic level was never in question, at the top level he didn’t have much to show on his CV (apart from a lone century against the West Indies four years earlier). The 2001 tour to India was a make-or-break moment for his career. This innings of 119 was special as Hayden announced himself to the world in the toughest of playing conditions. His knock was crucial as it came at a time when the top order was back in the pavilion with the score at 99 for 5. Together with Adam Gilchrist, who scored 122, Hayden set up a win for his team. Before this Test Match the opening spot was up for grabs; after it, the Australians had found an opener who would play some of the most memorable knocks of the next decade.

This Test Series between the two sides is often remembered for the wrong reasons. Poor umpiring and the ‘Monkeygate’ incident are the key talking points when one mentions this 4-Match Test Series. If not for these, the series would surely have been remembered for the kind of form Hayden was in. In the first two matches at Melbourne and Sydney his scores read 124, 47, 13 and 123. With Australia suffering a humiliating loss at Perth (where he was out with an injury), Hayden brought up another hundred at Adelaide in the last game. It was produced under immense pressure, as the Indians had posted 526 on the board batting first. Hayden combined with Ponting to deny the Indians a series-levelling win. This innings of 103 was also special as it was Hayden’s 30th and final test century, taking him past Sir Donald Bradman’s watermark of 29 tons.

Australia invariably won when Hayden scored big, but this was one rare occasion where his brilliant innings wasn’t enough to prevent a loss. After failing in the first innings, Hayden took apart the West Indian bowling in the second, scoring 177 off 260 balls. Along with Justin Langer, he built an opening partnership of 242 runs. But a collapse in the batting meant that the visitors folded for just 417 with the home side chasing it down comfortably in the end. Pundits of the game said that Australians were undone by their aggression, but it was quite a sight to watch Hayden pulverise the West Indian attack all over the park.

2002 produced was the most unlikely of conditions in South Africa. A dry and flat wicket, it was a paradise for batting while offering equal assistance to the spinners. Hayden played his part in the 1st innings, scoring 63 and helping his side take a 143-run lead over the hosts. The South Africans fought hard, though, and set an impressive target of 334 for the visitors to chase.

Remarkably, the Australians chased the total with four wickets in hand. It was Hayden, at the top of the order, who made this huge chase appear small, attacking the hapless South African bowlers and hitting them all over the ground. While destiny denied him a well-deserved hundred, Hayden walked away from the ground a happy man, having scored in turning conditions on the last day and helped his side win an important encounter.

When South Africa toured Australia in 2005, we saw the two best sides in the world locking horns. The first Test Match was drawn and Hayden failed to impress in a high scoring encounter. In the second test, however, Hayden was back to his best. He was clearly in a positive frame of mind in the first innings, scoring a patient 65 against a bowling attack that included heavyweights Shaun Pollock, Makhaya Ntini, Andre Nel and Jacques Kallis before one error of judgement cost him his wicket. In the 2nd innings, he wasn’t to make the same mistake as he dominated the South African attack, bringing up a well-deserved hundred. This hundred would have given Hayden a lot of satisfaction as it came against the best bowling attack in the world and also set up an easy win for his side.

There are few Australian batsmen who have enjoyed as much success in the sub-continent as Matthew Hayden. Much of this success can be attributed to his ability to take on the spinners. The big man had no problem getting down on his knees and sweeping with the spin or against it. At Galle in 2004, he displayed these skills to perfection. Taking the crease in the second innings, Australians were 161 runs behind and the Sri Lankans, who had Muralitharan and Dharmasena in their bowling arsenal, went on the attack. Hayden swept his way to a crisp hundred and set up the foundation for a score of 512 in the second innings. This helped the visitors win the Test Match by a huge margin of 197 runs, which few would have expected even at tea on the 3rd Day.

There is surely nothing as sweet for an Australian batsmen as scoring a Test Hundred against arch-rivals England in their own backyard. Hayden had previously missed scoring a ton in the 2001 Ashes tour to England, despite getting good starts, but he wasn’t going to end his career without having his name on that honours board! In what is often said to be one of the best Ashes series of all time, Hayden played an unforgettable knock of 138 at Oval. It was a slow innings by his standards where he piled up the runs instead of dominating the opposition, on a pitch that was offering assistance to the English bowlers. England had a 2-1 lead for the first time in decades going into the last Test Match of an Ashes series. Under this pressure he delivered. While this wasn’t enough to earn his team victory, it surely was one of his most well-rounded, patient and satisfying hundreds.

It was an era where the result of a Test series in Australia was always a foregone conclusion – the Aussies would humiliate the opposition and win everything. Part of what made them such a powerful unit was their strength of their top order, with Hayden giving his team the perfect start more often than not. The script was no different in England’s Ashes tour of 2002-2003, as Hayden bullied the English attack in the first innings scoring 197 in his incredible seven and half hour stay at the crease. His powerful innings helped his side put up a mammoth total of 492. Hayden didn’t offer any respite to the Englishmen in the second innings, scoring his another ton to help his team humiliate the visitors by 384 runs and setting the tone for the rest of the series which the hosts won 4-1.

This was arguably one of the best knocks ever played by an Aussie on the sub-continent. The Indians had their tails up after producing one of the most incredible comebacks of all time at Eden Gardens in the second test and the Australians were on the back foot, having been bamboozled by enigmatic spinner Harbhajan Singh. But Hayden stood tall under pressure, sweeping and lofting the Indian attack around the ground to bring up his maiden double hundred.

While most of his teammates seemed unsure of their front and back foot play, Hayden took on the Indian spinners with supreme confidence. Running out of partners at the other end, the Aussie opener continued to score at a brisk pace until eventually falling as the last man out. While his double ton wasn’t enough to prevent a defeat in one of the most keenly contested Test series in recent memory, he surely won the admiration of millions of fans all over the world.

Zimbabwe weren’t exactly the best side in the world in 2003 after the controversies that rocked the team during that year’s World Cup. Nonetheless, they possessed a solid bowling line-up that included Heath Streak, Andy Blignaut and Sean Ervine. The Australians were expected to win well, but few could have predicted the demolition that would follow.

Hayden had come into the match off the back of a series of strong performances in the prior 12 months (scoring six centuries) and Australian fans had started to see him as one of their most dependable batsman. The performance that followed solidified his reputation as one of world cricket’s most destructive players. Hayden’s astonishing 11-hour-long stay at the crease saw him score at an unbelievable strike rate of 86.95 as he tore apart the helpless attack, breaking Brian Lara’s record for the highest Test score of all time (though Lara would later recapture the crown). It was an innings that epitomised Hayden; powerful, controlled, aggressive. He simply toyed with the opposition during a near-faultless innings on what is considered to be the fastest pitch in the world.