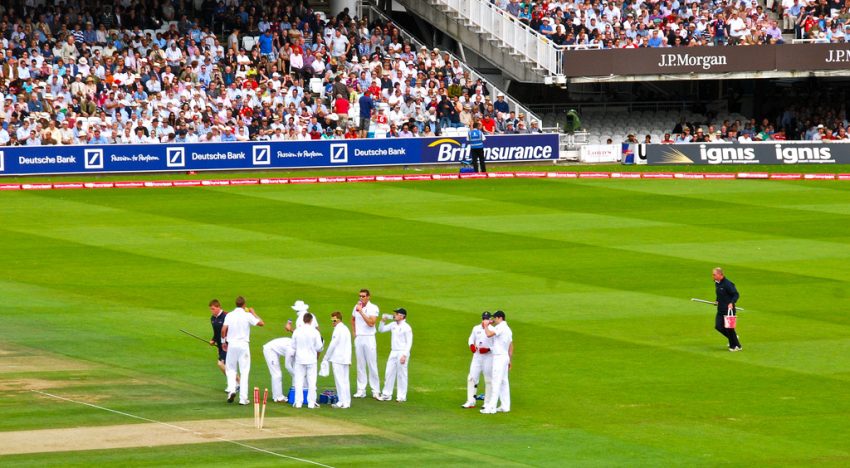 Over the years, there have been some superb English players to have graced cricket. Not surprisingly for the country who invented the game, they have churned out a steady stream of wily spinners, explosive batsmen and pacey bowlers. The 1990’s was no different and during that decade, some superb players donned the whites to give their all for their country. While it is fair to say that English cricket overall suffered a dip in the 90’s, these individuals were still great players.

We take a look at the ten best to have played for England then and see why they were so special:

As with a lot of English players who could hold a bat and bowl a bit in the 90’s, Lewis was at one point hoped to be the ‘new Botham’. While he never lived up to that billing, he was a useful lower-order batsman, a fine fielder and a quick, aggressive bowler. It was perhaps his consistency rather than his talent that eventually let him down. He did have a rather controversial character also that hampered his progress at international level. Incidents like fielding in the searing heat without a hat or sun cream and then having to go off because of sun stroke are examples of this.

When he was playing and in-form though he was superb. His height meant he could get plenty of bounce and movement in to his seaming bowling deliveries. Although not lightning quick, he certainly had enough pace to cause trouble to the man at the other end. When he was at the crease, he was often explosive with a great onside drive and fierce cut. He was very agile in the field too and gave his team an extra boost in that area also. Although he never quite hit the heights many expected, his century in Madras against India in 1993 showed his talent. Sadly, after retiring from the game he was convicted of drug smuggling and sentenced to time in prison. Now out, here’s hoping he can find success in a new chapter of his life after cricket.

A very popular and well-liked player within cricket is this guy. Known as ‘The Cat’ (because he liked to sleep a lot), Tufnell was not only a great slow left-arm bowler but brilliant for team morale. He had the sort of jovial personality that could give the dressing room an instant lift if needed. In just 42 Tests he took 121 wickets which leaves him at number 37 in the list of all time English wicket takers. He had great accuracy and flight which very often lured the batsman into playing at shots he shouldn’t and giving his wicket away.

Although not the most adept out in the field, his importance with ball in hand was there for all to see. Many will remember him for taking 11 wickets for 93 runs against Australia in 1997 at the Oval to win ‘Man of the Match’ in an inspired show. His 6 for 25 at the Oval against the West Indies in 1991 was another performance that showed how destructive he could be. After retiring, he put his warm character to good use with stints on TV and BBC’s ‘A Question of Sport’ as a team captain.

At 6 feet 5 inches, Andrew Caddick certainly had all the physical attributes to be a successful fast bowler. Luckily for England, he also had the raw skill too! A fast bowler in the traditional sense of the term, he used his height to get great bounce and movement. Batsmen found this a nightmare to play against as his 13 five wicket hauls in Test match cricket shows.

Notable inclusions in that list were a brutal spell against the West Indies in 1993/94 when he took 6 for 65 at the Third Test in Port of Spain and 5 for 42 in the Sixth Test at the Oval against Australia. He was a key member of the English bowling line-up right through the 1990’s and gave the English attack some genuine threat. Never doing quite enough to remembered as an all-time great, he was certainly one of the best bowlers for England in the 1990’s and so deserves his place on this list.

If ever there was a figure who summed up the divided nature of cricket in England in the 1990’s, it was this guy. Some loved him but some hated him – this was not helped by his supreme self-confidence that bordered on arrogance at times. A quick bowler, he had exceptional seam and swing control that he used to keep batsman guessing at the crease. His pace and swing bagged him many wickets and led him to being a very successful player for his country.

Proof of this was the 5-wickt hauls he took in his England career. Probably the best was the 7 for 43 he took against the West Indies at Lords when he was unplayable. Two Tests later in the same series he claimed a hat-trick to further signal his skill and bowling ferocity. Overall, he took 131 wickets in 37 matches which, while not exceptional, shows what skill he had when steaming in with the ball in hand.

This guy was arguably the best English batsman during this decade and one with the most complete game. He had a solid defence if needed and could shut up shop to stay at the crease fantastically. His attacking prowess was equally good though and he could take on most bowling line-ups, whether pace or spin. He was seen as something of a counter-attacking player and could quickly build an innings up if a match was not going in England’s favour. This naturally placed him in the middle-order and made him a key player for his country.

Thorpe was also a great fielder and usually played in the slips. He had great reflexes and a safe pair of hands which saw him take any catches for the English bowling attack. Overall, he was a very talented and reliable player for his country and scored 6744 runs in exactly 100 Test match games.

Darren ‘Dazzler’ Gough was a much-loved quick bowler for England, with both the public and team mates. His infectious personality rubbed off on those around him and made him someone who was great for team morale. He also superb with the ball in hand! In 58 Test matches, he took 220 wickets which leaves him as seventh in the list of all time Test wicket takers in England. This is a pretty good record when you see the company he is in.
The spearhead of the English attack throughout the 1990’s, he was genuinely quick with a good action and approach to the wicket on run up. He achieved what was thought of as a ‘skiddy’ action which meant the ball would often sail through quite low to surprise the batsman. He had great control of swing and a brilliant Yorker that gained him many wickets. He had many fine moments in an England shirt but perhaps his best was the hat-trick against Australia in 1999 at Sydney. He was on fire that day and quickly took his three wickets with his usual mix of swing and accuracy.

Born in Surrey, Mark Butcher was a player who made his debut for England toward the end of the 1990’s but a great player for the last few years of the decade for his country. A superb left-handed opening batsman, he played faster bowling particularly well but could be found out against spin. He possessed a great cover drive though and had a punchy style that was great to watch.

Making his first appearance in 1997 in the First match of the Ashes series, he played 71 Tests with 4288 runs made at a 34.58 average. This included 8 centuries including two fine hundreds in 1998 against South Africa and Australia. These innings showed off his powerful style and ability to drive the ball through gaps in the field. He had the talent to be an England great but was perhaps not consistent enough for that – he was definitely one of the better players in the 1990’s for his country though.

Amongst the finest players to have pulled on the whites for England is definitely this guy. Not only was he a great batsman but also a superb captain. When he took over England were languishing at the wrong end of the international rankings but by the time he resigned in 2003 after 45 matches in charge, they were up to a creditable third.

This rise up the rankings involved four straight Test series wins on the bounce and his final figures of 17 victories as England skipper show how excellent he was in that role. Not only did he have strong leadership skills and a sharp cricket brain but he also had the rare ability to galvanise the men in his charge to greater performances than they would otherwise give.

As a batsman, he was pugnacious and clocked up over 5,000 runs in 96 Test matches. His best performance was a superb 207 not out in 1997 in the First Ashes Test at Edgebaston which had many commentators purring in delight as he stroked the ball around. It’s fair to say that without his batting talent and strong leadership, English cricket may have been in a totally different place now.

One of the first names on the team-sheet for England in the 1990’s was this wicket-keeping batsman. Unusually for someone with a dual role, he was equally good at each! His glove-work was outstanding and he had a very safe pair of hands that could be relied upon in the field. With bat in hand, he was a very competent player especially against pace. The second most capped player in English Test history, Stewart was one hell of a player.
Proof of this batting talent was the 190 he scored against Pakistan in 1992 when he showed the full range of strokes to bash the attack about. Unbelievably, this was his fourth century in five Test matches! Other highlights include his century in each innings against the West Indies in 1994 and scoring over 8,000 runs in Test cricket.
Stewart was a very useful player for the English in the 90’s not only for his ability to score big, important inning but also as a wicket-keeper when they were fielding. His agility and reflexes meant he took some wonderful catches.

Gutsy and single-minded, Atherton had all the ingredients to not only open the batting for England but also captain the side too. He was very strong mentally and easily able to handle any verbals from the opposition if they tried to put him off. This mental strength and sharp cricket brain showed itself in his captaincy where he led the team well.

As batsman, he had a great defence and would use this to build his innings up and get the English team off to a steady start. He could attack when needed though and had a fine hook shot as well as being effective hitting through the point area. Considered one of the best English batsmen of the 1990’s, his consistency and reliability made him a vital anchor to his countries batting efforts.

He made his mark right at the start of the decade in 1990 with a 151 against New Zealand on his first time opening the batting for his country. In all his scored 16 centuries in his Test career including a huge 185 against South Africa in 1995 and a storming 131 against India in 1990. A real cricketing great for his country, Atherton was a brilliant batsman and one of England’s finest skippers.

England have produced some mighty fine players over the years and the 1990s was no different. This decade undoubtedly saw its fair share of talent and character turn out for them and laid the foundations for continued English success into the modern day. The players on this list certainly had some fantastic attributes and deserve their reputation and place here.