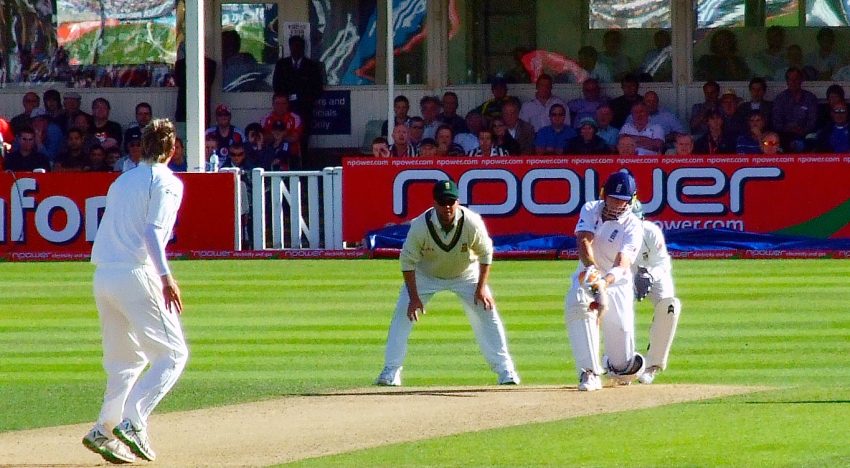 Dropped catches are among the most dreaded things you can experience on a cricket field. Every player from the Test arena to the village green has put down their fair share of chances, and will know that there is nowhere to hide from their team-mates when they do. The feeling of costing your team a wicket can only be offset by the hope that your side is not punished for your individual error. Sometimes, though, a drop can prove decisive to the outcome of a match, as these unfortunate players proved to their detriment.

Dropping a catch as a wicketkeeper is never a nice feeling. More than any other position in the field, it is the role where you are expected to take everything which comes your way. When a chance does go to ground, then, a keeper can rely on receiving not a modicum of sympathy from his or her team-mates. Nowhere has this been more epitomised than by Kiran More’s dropping of Graham Gooch at Lord’s in 1990. Despite being a more than well-respected gloveman as well as a mainstay of the Indian side of the time, More managed to put down a catch off Gooch – whose England side were batting first in the first match of the series – while the England batsman was on 36. It was a regulation chance, which More would not have to have moved much to have taken, though he later claimed that he had not been expecting the ball to move as much as it did after passing the bat due to the English conditions. If missing such a simple chance was not demoralising enough on its own, Gooch punished the error by scoring a mere 297 more runs that innings, as he racked up a legendary innings of 333 in a team effort of 653 for 4. It set the tone for a match and a series that England won by a comfortable margin, but More and his team-mates may wonder how different things could have been had the keeper not fluffed his lines.

The England Test team was not the happiest place to be in 1997. The side had struggled near the bottom of the Test rankings for most of the decade, following the retirement of many of the players who had proved so crucial to them throughout the 1980s. They had not won an Ashes series for almost ten years, winning only 2 matches against Australia of the 22 they played in that period. Given the dire straits the team had been in, one can imagine how important it was for the team to put in a good performance going into the fourth Test of the Ashes summer, with the series all square at 1-1. While England were bundled out for 172 early on, they had responded well with the ball, reducing the tourists to 50 for 4 to leave the match on a knife-edge. Debutant bowler Mike Smith then found the edge of opener Matthew Elliott’s bat. The ball flew to the ever-reliable Graham Thorpe at first slip, at head height and going at no real pace. It went straight into his hands – and straight out again. Elliott survived, and went on to compile 199 to put the game, and in effect the series, out of England’s grasp. The home side’s best Ashes opportunity in a decade had gone, and showed no sign of coming back. To add insult to injury, Mike Smith, the unlucky bowler, went wicketless in the match and never played another Test for England.

One of the most frustrating things about dropping a catch is the thought of what might have been, how the game might have changed had the catch been taken. Sometimes the batsman may go on to be dismissed the next ball, in which case all is forgiven – no harm done. Sometimes, however, the reprieved batsman can go on to decide the game, or even hit the winning runs. The latter happened to the unfortunate Ian Healy during the remarkable Test between the west indies and Australia in Barbados in 1999. Healy had combined with bowler Jason Gillespie to dismiss West Indian captain and key man Brian Lara cheaply in the first innings. As the match neared its end, however, it was Lara who was guiding his team towards victory, having made a century during his team’s unlikely fourth innings chase of 308. With seven runs to win, and two wickets in hand, Australia were nearing the last chance saloon when the unflappable Lara uncharacteristically nicked one off Gillespie. Even more uncharacteristically Healy, so often a safe pair of hands for his side, dived to his left but put down the chance. In truth, Health’s attempt made the chance look harder than it was – it could have been taken comfortably with better foot movement. The chance was gone, and the West Indies edged to victory by one wicket. Of course, it was down to none other than Lara to hit the winning runs.

South Africa’s unfortunate reputation for underachieving in major tournaments has a long history. They have suffered unfortunate Duckworth-Lewis calculations and last-over chokes alike, snatching defeat from the jaws of victory. And then, of course, there was Herschelle Gibbs’ famous drop off Steve Waugh. Australia met the already-qualified South Africa in the final game of the 1999 World Cup’s Super Six stage needing a win to make the semi-finals of the tournament. Chasing 272 to win, Australia had reached 152 for 3 with captain Steve Waugh looking assured on 56, bearing his side’s hopes of survival. Suddenly, out of nowhere, Waugh chipped a tame delivery from Lance Klusener towards Herschelle Gibbs at short midwicket. To say the chance was simple would be an understatement, and Gibbs seemed to pouch it without any difficulty. However, in his exuberance at apparently taking such an important wicket, he attempted to throw the ball into the air in celebration, at which point it squirmed out of his hands and onto the ground. The umpires determined that the ball had not been in Gibbs’ control and Waugh was allowed to continue, commenting to Gibbs that he had just lost the match for his team. Waugh’s words were prophetic, as he stayed in to make an unbeaten century to guide his side to victory. Australia made the semi-final where they played South Africa again and, of course, knocked them out. Had the unfortunate Gibbs, who, people tend to forget, made a century in the game in question, taken the catch, things could have worked out very differently for South Africa.

The Australian leg-spinner is undoubtedly one of the finest players ever to play the game. He was consistently outstanding for Australia with the ball and in the field throughout his 15 years in Test cricket. Even during the 2005 Ashes, when the rest of his team was struggling, Warne was on a different level, taking 40 wickets in total. If this article has taught us anything, however, it is that cricket can be a cruel game at times. So it proved in this case, as at a crucial point in the final match of the series Warne was responsible for missing the chance that could have swung the series back in Australia’s favour. England, batting in their second innings, were teetering on the brink of a collapse that could enable Australia to win the game and tie the series. Kevin Pietersen, then an up-and-coming batsman in the England side, was on just 15 when he drove hard at a Brett Lee delivery outside the off-stump. The ball went to Warne at slip, where he attempted to take it in front of his face, but fumbled it and failed to grasp the rebound. Pietersen made the opposition pay for exonerating him, scoring a brilliant counter-attacking century – his first in Test cricket – to take the game to safety and by extension, his England side to a historic series victory. Warne’s contribution to the series likely prevented Australia from losing more heavily overall, but like Thorpe eight years earlier he also earned the unfortunate accolade of ‘dropping the Ashes’.