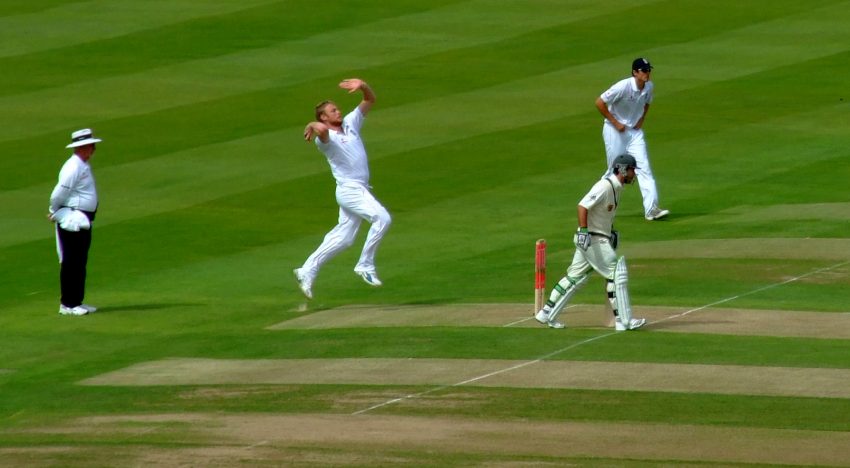 One of the most fiercely fought rivalries in cricket is the Ashes series contested between England and Australia. The fight for the little red urn and the honour of taking it home as victors has been a highlight of the game’s calendar for decades. Both teams are desperate to get their hands on it and prove they are the best which has resulted in some amazing games over the years.

Within those games and numerous fantastic Ashes series, there have been a number of standout individual performances from an England perspective.

Let’s take a look at the ten best over the years and what exactly it was that made them so special:

A slow-left arm orthodox bowler, Hedley Verity was a very accurate and talented player for his country. Almost impossible to play at times, his line and length was a nightmare for batsmen! Nothing showed this more than the Second Test of the 1934 Ashes series at Lords.

With Australia looking good in their first innings at 192 for 2, the rain fell on the uncovered pitch overnight and that played into Verity’s hands. He took full advantage of this chance and went on to put in a brilliant individual effort in this match, taking 7 for 61 in that first innings and then 8 for 43 in the second. This included getting Don Bradman’s wicket twice. Incredibly, 14 of these wickets came on the third day’s play!

Although Australia went on to win the Ashes that year, Verity’s performance in this Test gave England a match win and put him into the history books.

By the time the 2005 Ashes series came around, rumours abounded as to if and when Kevin Pietersen would play for England. The popular Pietersen had caught the public’s attention with his dynamic batting style and ability to entertain with big scores and plenty of boundaries. Many felt this was just what was needed to help England bring the Ashes home.

In the end, he was selected for the series and enjoyed a fine series before heading into the final Test at the Oval. Bowled for 14 by Shane Warne in the first innings, the pressure was on for him to post a big score in the second and he certainly delivered that! Some would say he was slightly lucky, as was dropped a few times on his way to 158, but fortune favours the brave.

He reached his maiden Test century with a majestically driven 4 and carried on past 150. Even better, this innings included 7 sixes which broke the previous record of 6 sixes in one Ashes innings by Sir Ian Botham. A fantastic effort, this score helped his country to a series victory and earned him the ‘Man of The Match’ award.

Stuart Broad is one of the best and most successful modern cricketers for England. A tremendous right-arm seam bowler for his country, Broad has enjoyed many fine moments in the English whites over the years. Indeed, so successful has he been that an award of Member of the British Empire was conferred on him in the 2016 honours list for services to cricket.

One of his very best performances was in the 2014/15 Ashes series. In the Fourth Test at Trent Bridge he really turned the magic on for England fans and the heat on the Australian team. Steaming in with his usual blend of seam and accuracy, Broad took a staggering 8 wickets for 15 runs in just over 9 overs! This stunning individual effort saw England skittle the Aussies out for a mere 60 runs in 18.3 overs in that innings of the match.

Even more astounding is how those stats break down when you look further. Broad took four of the wickets in his first 13 balls, ripping through the top order of the Australian batting. This left them on 21 for 5 which is the quickest any team has lost five wickets in a Test match by then. The bowling figures he achieved are the third best by an English bowler ever! This was a true superstar performance and shows what a great bowler he is.

Having tasted victory already in the 2005 Ashes series, Andrew ‘Freddie’ Flintoff was all revved up for more of the same in 2009. This was certainly true after the immense disappointment felt in England after the previous 2006/07 series defeat. A true legend of the English game, Flintoff was an explosive batsman, a destructive bowler and a key cog of the English team he was part of. They needed him firing on all cylinders if they were to stand a chance in 2009 and in the second Test he certainly was!

Lord’s had been a happy ground to play on for Australia in the past but Flintoff ended a 75 year wait for an English Ashes victory at the ground. Having set the Aussies a massive 522 for victory, English confidence of a win was high. Alarm bells started to ring however when Australia had made 313 for 5 by the end of Day 3. Enter Flintoff to calm English nerves!

Bowling a spell of 10 straight overs from the Pavilion End, Flintoff steamed in with his usual aggression and pace. Getting rid of Brad Haddin with his fourth ball of the spell, he went on to make figures of 5 for 92 and propel England to victory. It was the ideal send off for ‘Freddie’ as Lord’s had been the ground he scored his maiden Test century in England on in 2003.

Going hand in hand with Sir Ian Botham (further down on our list) is Bob Willis. His spell in the Third Test at Headingly in the 1981 Ashes series helped England to an unlikely win. A very fast and effective bowler, Willis used his skill and height to great use and was England’s premier quickie for many years.

In the Third Test of the 1981 series, England were in trouble until Botham’s 149 not out gave them hope when bowling at Australia for their second innings. Even then, an Australian win was expected as they only needed more than 139 to make it home. They didn’t, however, reckon with Bob Willis!
Steaming in with real purpose and passion, he took 8 wickets for just 43 runs in an inspired spell. Australia fell to just 111 runs in total to see a wildly celebrated English win. When you consider England were at one point 500-1 for the win with the bookies, it shows just what an achievement this was.

Not one player in the history of cricket has taken more wickets than Jim Laker in a single Ashes series. The quite unbelievable 46 he got overall in the 1956 series is a remarkable achievement and one that is a landmark in English cricket. An elegant and accurate off-break bowler, he took many wickets for England in his career and formed a top partnership with Tony Lock, a left-arm spinner, for the team. Laker is considered by many to be England’s finest finger spinner.

The performance in that 1956 Ashes series that stand out, though, is ‘Laker’s Match’ in the Fourth Test at Old Trafford. Laker had already taken 9 for 37 in the first innings of the game when he returned to bowl in the second innings. Ripping through the entire Aussie batting line-up with his subtle spin, he took all ten wickets this time for 53 runs. In all, this left him with figures of 19 wickets for 90 runs in the match, setting a record for a 5 Test Ashes series which has not been broken to this day.

Now I know this is a bit of a cheat as ‘Freddie’ has made our list already but he was just so good for England, especially in the Ashes, I had to include him again for another fabulous performance. The one in question is the famous ‘Fred’s Test’ at Edgbaston in 2005.

Flintoff’s performance in this match and indeed the whole series was so special when you consider his injury worries coming into the series. Surgery on his left ankle made it touch and go as to whether he would be available, but in the end he made it. His performance in this game was particularly outstanding. With ball in hand, he took 7 wickets including the valuable scalps of Langer and Ponting in the first innings. At the crease, he was equally astounding, grabbing 141 runs across both English innings. This fabulous effort gave England a 2-run victory and set them on their way to win the whole series.

A modern English great, Alastair Cook was a successful captain for his country and also a superb batsman. Tipped for greatness from a young age, Cook was as elegant and powerful a player as you will see and had all the shots in the book. The amount of runs he clocked up in his international career is testament to that.

It is his performance in the 2010/11 Ashes series in Australia that merits a mention here though. England eventually strode to a fairly easy 3-1 series win and a lot of credit goes to the runs Cook scored. The innings that impressed most, however, was his stupendous 235 not out at Brisbane in the First Test. Absolutely on fire, the Australian bowlers had no answer to his superb shot placement and choice.

That 235 gave Cook, and England, the platform the needed for the rest of the series which is why it was so important. In all, Cook finished that Ashes with a total of 766 run and a 127.66 average!

A legend of English cricket, Wally Hammond cemented his status in the history books with his performances in the 1928 Ashes, held in Australia. What is even more amazing is that he hadn’t blown the public away with his England performances prior to that. Making a few half-centuries before he left for Australia, there was little to predict the runs he would score over there.

It’s the Fourth Test at Adelaide that particularly stands out, for the runs scored in both innings rather than just one and the style in which he did it. Notching 119 not out in the first innings and then bettering it with a brilliant 177 in the second, Hammond adopted more cautious batting style to stay at the crease and accumulate runs. He still played with grace and panache, though, and the 177 in particular is regarded as one of his finest innings for his country.

In the end, England won the series 4-1 and Hammond finished with 905 runs at 113.12 average – pretty special and something that is unlikely to be repeated often in the future.

When you talk about English cricket, the name of Sir Ian Botham looms large. A colossal player for his country and a supremely talented cricketer, he is still one of the best known and loved players for his country to this day. With his charismatic personality, run-scoring swagger and class bowling Botham was a fabulous player.

The performance that tops this list is the 149 not out he blasted at Headingly in the Third Test of the 1981 Ashes series. It is worth remembering that this series is universally known as”Botham’s Ashes” which tells you how amazing he was in it! In truth, we could have chosen his 10-wicket haul at the Oval in the Sixth Test or the 118 he made in the Fifth at Old Trafford as well.

What makes the Third Test score so good was the pressure he was under when he made it. Having just resigned as captain of the team and lost the first two Ashes Tests, Botham was facing some serious questions over his future. What a response he gave with this score! An explosive, swaggering second innings, it showed everyone he still had it and helped give England an unlikely victory. This game also ignited England’s series and allowed them to go on to win it.

There have been loads of great individual performances from England players in Ashes series throughout history as this list shows. From explosive batting dynamics to outstanding bowling displays, these players have got their place in the history books for the excellence they showed and the entertainment they gave the fans.