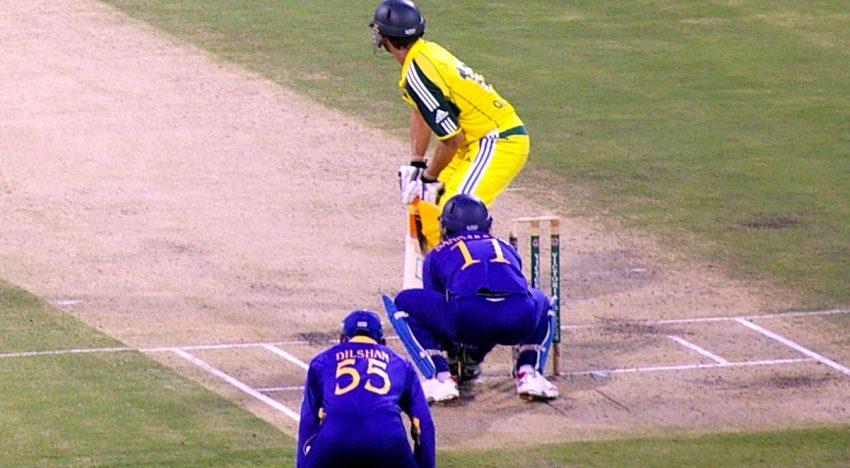 Prior to the arrival of Adam Gilchrist on the international cricketing stage, the role of wicket keeper was neatly defined. Your job was to catch the ball, repeatedly, while providing less-than-gentlemanly encouragement to the opposing batsmen. If you got a few runs with the bat this was a plus, but not strictly a requirement to be considered a great gloveman. Adam Gilchrist almost single-handedly changed that.

Now, if you want to be considered one of the great wicket keepers, you have to be more than proficient with the bat. If you’re a younger reader, dreaming of representing your country while behind the stumps, you have Gilchrist to thank for making it harder.

Despite the factiousness clearly exhibited above, one has to try incredibly hard to say a bad thing about the man. Bearing witness to a sublime 204 not out against South Africa in Johannesburg will always be one of my favourite cricketing memories, even if I had to grudgingly and secretly respect one of the Proteas’ arch-enemies. Even off the field, Gilchrist exhibited a moral fibre and a value system that seemed out of place in the win-at-all-costs mentality the media often portrays of international sport.

Passing the Baton – The Arrival of Adam Gilchrist

Gilchrist’s international career began relatively late, often seen as Ian Healy’s (another legendary gloveman) understudy. He eventually made his debut for the One Day side in 1996 against South Africa due to Healy being injured. Gilchrist’s first outing was by no means spectacular and definitely did not hint at any of the great heights the man was to eventually ascend. After scoring a modest 18, Gilchrist was clean bowled by Allan Donald. His second match was no better, being run out for a duck. Once Healy returned from injury, Gilchrist remained in the team as a specialist batsmen after Mark Waugh injured his hand. He fared better this time against South Africa, scoring 77 in Durban and averaging 31 for the series. The cricketing community was finally treated to a smidgeon of his enormous talent.

Gilchrist’s test debut had an unfortunate cloud hanging over it, as the much-loved Healy was unceremoniously dropped due to a poor run of form. Healy reportedly asked if he could have one send-off game in front of his home crowd at the Gabba before he retired; however, the request fell on deaf ears and Gilchrist started the test against Pakistan in 1999 – to a less than welcoming crowd. Despite the icy reception, Gilchrist was unfazed. He scored a quickfire 81, took five catches and pulled off a crisp stumping. His entry into the test side coincided with Australia’s period of utter dominance.

By 2001, Gilchrist was an important and well established character within in the side and he played a major role in Australia’s outstanding 4-1 Ashes victory in England. It was during this series that he had his first taste of captaincy, one of the few areas were Gilchrist would not excel (filling Steve Waugh’s era defining role would have been a herculean task!). Still, during Gilchrist’s brief captaincy stint, he did achieve what became known as the last frontier for Australian cricket, to win in a test series in India. His personal stats for the tour could be seen as below average when measured against his stellar career, but to captain a side to win in India is no small feat.

In an age where batting is a science with trigger movements, correct head position, proper back lift and endless technical analyses, learning to bat can be daunting. Gilchrist’s philosophy couldn’t be simpler, which he described himself as “just hit the ball”. Watching Gilchrist bat is probably the modern equivalent of watching a Viking swing a battle axe. Cricket balls – and by extension the bowler – were bludgeoned into submission. This back-to-basics approach resulted in some truly memorable knocks. The aforementioned 204 not out is a personal favourite, but this was by no means the only one. Gilchrist shone at World Cups and his 149 off 104 balls in the 2007 tournament quite literally stole the title from Sri Lanka – it has got to be ranked as one of the world’s greatest knocks. Another 149 against Pakistan in a test when all appeared lost came to represent the grit of the man. Perhaps, though, the knock he will be best remembered for was a century against England in an Ashes series. The ton was hit in a phenomenal 57 deliveries – missing Viv Richards record by one ball! What could the bowling side do against such a dominant display? Throughout his career he managed to keep a scoring tempo of 81 out of a 100 balls in Test matches – an unbelievable feat.

While much has been said about Gilchrist’s ability with bat in hand, he was equally capable with the gloves on. During his Test career he took 379 catches and 37 stumpings, and his One Day record is equally impressive, securing 417 catches and 55 stumpings. This all from a player many critics deemed too tall to keep wickets successfully!

The Walker – A Resolute Stand

This is one facet of Gilchrist’s game which left critics, journalists, team mates and opposition divided. Should a player ‘walk’ before being given out by the on field umpire? This will probably be one of the eternal debates of cricket. Those who believe fundamentally in the gentlemanly spirit of the game argue that walking off when you feel you are out is exemplary behaviour. The other side of the coin is you should take every opportunity given to you in a sport when bowlers are either trying to confuse you with spin or concuss you with a beamer. You should never walk until you see the umpire’s upraised finger according to this camp. Gilchrist was most certainly in the former and became known as a walker. The most famous example of this was against Sri Lanka in the 2003 World Cup when Gilchrist walked before been given out. Against Bangladesh he walked despite replays showing he was most certainly not out. This drew a lot of criticism from team mates and the international community. Despite the criticism, Gilchrist continued to exhibit the values that defined him as a cricketer and a man. In world where winning is often seen as the only good, having integrity in spades is honourable and refreshing.