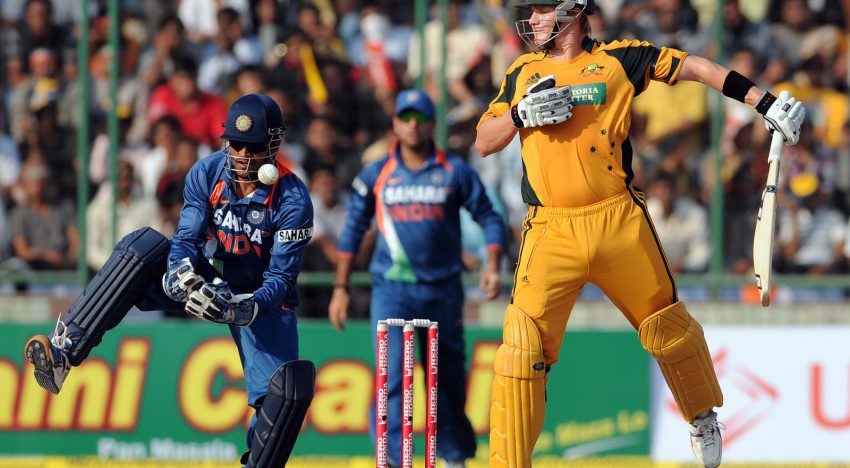 To a layman cricket would seem like a contest between the bat and the ball or to put it in other words a contest between the batsman and the bowler. But diehard fans know the importance of the other 10 players in the field who can change the course of a game with a catch, a run-out or a stumping. In fact, for this very reason, the 11 players on the fielding side including the bowler are equally involved in every delivery that is bowled to a batsman. Sadly, fielding and wicket keeping efforts are often understated in a cricket match. Here we take a look at 10 incredible fielding and wicket-keeping efforts that turned the tide of the game in a One Day International.

Low scoring matches that go down to the wire are often decided by the quality of fielding. Aussie skipper Mark Taylor was one of the best slip catchers the game had ever seen and in an ODI against the West Indies in Sydney he just proved how quality slip catching can change the course of the game. The home side were bowled out for 101 in a rain-curtailed game of 30 overs. The game was delicately poised with the visitors at 49 for 5. This is when Taylor grabbed 4 catches in the slips and changed the course of the match. His victims included Carl Hooper, Gus Logie, Keith Arthurton and Junior Murray.

When arch-rivals India and Pakistan meet the world knows the kind of pressure the players have on their shoulders. On a cold day at Dhaka, the Indians had made 245 batting first with Tendulkar scoring a brilliant 67. But it was his effort in the field that helped the side win the match by 18 runs. Standing in the slips he grabbed the catches offered by Shahid Afridi and Aamer Sohail. He then took the wicket of Inzamam-ul-Haq of his own bowling. Just when Pakistan seemed to be running away with the game he took the catch of Azhar Mahmood in the outfield to seal Pakistan’s fate in the game.

Australians are known for their athleticism and as the best runners between the wickets. But in an ODI game against the Sri Lankans in Adelaide they found themselves against the strong arm of Tillakaratne Dilshan. Sri Lanka had posted 274 runs on the board batting first and the Aussies were in for a good chase with 52 for no loss. This is when Dilshan got into the act and was involved in the run outs of Simon Katich, Ricky Ponting and Damien Martyn in quick succession to put the hosts in trouble. He ended the match with another run out involving Mike Hussey to seal a win for his side by 22 runs. This is the only time a fielder has his name in the record books for 4 run outs in an innings.

He surely isn’t the most brilliant wicket keeper in the world, but MS Dhoni surely has the best brain behind the stumps. In a game against the English side in Leeds, Dhoni showed his athleticism and grabbed 5 catches and also effected a brilliant stumping. India put in huge 324 runs on the board but on a flat track with the ball coming on to the bat the English side would have fancied their chances. Right from the word go Dhoni was at his best and registered his name in the first five English wickets that fell. He caught Alastair Cook, Ian Bell, Kevin Pietersen and Owais Shah. Dhoni also brilliantly stumped Matt Prior before grabbing another catch from Jon Lewis to equal the world record of most dismissals by a wicketkeeper.

Sir Viv Richards is celebrated as one of the best batsmen to ever play the game but he wasn’t a bad cover fielder either and often proved his worth with his powerful arm. In the strongly contested 1979 World Cup finals it was perhaps the fielding efforts of the West Indies that made the difference between the two teams. After scoring 291 runs batting first the Windies restricted Australia to 274. There were five run-outs in the Australian innings with Richards being involved in three of them. His victims included Alan Turner, Ian Chappell and Greg Chappell. The fact that Richards produced this effort at a time when fielding wasn’t taken as seriously as it is now makes it even more incredible.

If you are involved in a low scoring game the only way to win is to ensure you grab even the half chances that come your way. On a flat and placid pitch in Sharjah not many gave the Indians a chance when they were dismissed for only 125 batting first. What happened next was quite incredible as the Pakistanis were bowled out for 87. Standing in the first slip position, Gavaskar grabbed all the catches that came his way including the amazing effort to dismiss Saleem Malik off the bowling of Ravi Shastri. His other victims in the game included Mudassar Nazar, Rameez Raja and Javed Miandad. It was Gavaskar’s brilliance along with some disciplined bowling that earned India a seemingly impossible victory.

It is only 15 times that a wicketkeeper has been involved in 6 dismissals in a ODI in the history of the game and Gilly has six of them to his credit! It was quite a task to choose one among the many, but we’ve selected the game against arch-rivals England at Sydney in 2003. Andy Bichel and Brett Lee were troubling the visitors with their pace and swing and Gilchrist took two catches off each of them. His victims included Marcus Trescothick, Nick Knight and Alec Stewart. He also stumped Paul Collingwood off the bowling of Shane Warne to ensure the Englishmen were restricted to 117 batting first. Opening the batting he hit an unbeaten 69 to finish the game in mere 13 overs in what was one of his best all-round performances.

Gus Logie didn’t have the most celebrated career. After all he was a part of a champion side and there wasn’t much to do with the bat when you played with the likes of Gordon Greenidge, Dasmond Haynes and Viv Richards to name a few. But he made it to the record books being the first player to win a man of the match award for his fielding efforts. Batting first Pakistan would have feared batting against Walsh and Marshall. But it was Logie with his three great catches and one of the best run-outs you would ever see to get rid of Javed Miandad who ensured that Pakistanis were dismissed for 145 creating an easy win for his side.

Ridley Jacobs wasn’t just a swashbuckling batsmen but also a fine wicketkeeper who stuck to the basics. And he proved this in one particular ODI game against the Sri Lankans in their own backyard. Set 250 to win the home side were cruising at 92 for no loss in the 18th over. This is when Jacobs got into the act and effected a very difficult stumping dismissing Avishka Gunawardene off the bowling of Neil McGarrell. He took five catches later in the match including four off the bowling of Corey Collymore standing up to him to run through the Lankan middle order. This effort meant that West Indies earned a victory from the jaws of defeat against the home side.

If you were wondering why a certain Jonty Rhodes is missing from our list, well we have him right at the top. The man who made fielding glamorous also holds the record for the most catches in an ODI; the only instance when 5 catches were taken by a player other than a wicket-keeper. And it came in a game where the South Africans had just managed 180 runs with Rhodes himself being the second highest scorer in the match with 40 runs. ‘Catches win matches’, they say, and when the West Indian side came out to bat they found an impregnable point fielder who not only grabbed every opportunity that came his way but also stopped the flow of runs through the region. If you are wondering who his victims were, well they included the likes of Brian Lara, Desmond Haynes and Jimmy Adams. Rhodes was the Player of the Match primarily for his fielding efforts, which was only the second such occurrence in the history of ODIs.