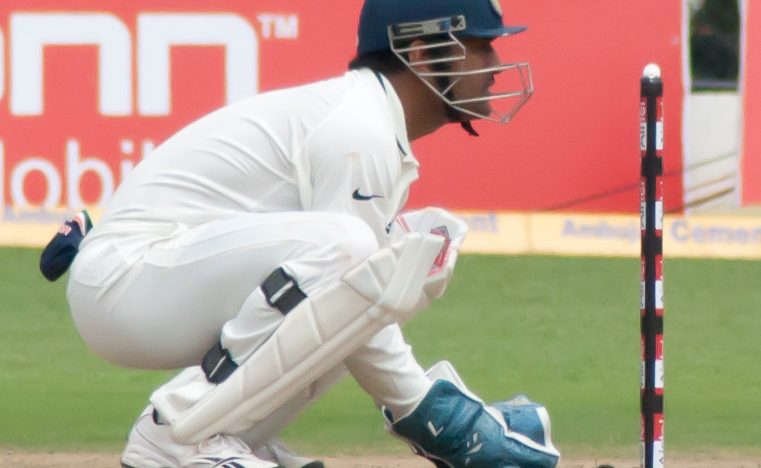 The expectations of a modern wicketkeeper have risen dramatically since the game became professional. Now more than ever a wicketkeeper is expected to be a version of an all-rounder performing with both the gloves and the bat. This evolution came to be because of the performances of many of the players in the list below, not only as incredible cricketers behind the stumps but also at the crease.

The son of a former English Test player, Alec Stewart had cricket in his blood. He not only represented his country for more than a decade as a long-time wicketkeeper and batsman, he also was English captain during the season of 1998-99. Making his debut for England at Test level in 1989 and ODI format in 1990, Stewart would don the gloves for his country until his retirement in 2003, making him the most capped Test player at that time. At the start of his international career, Stewart’s main role was as an opening batsman. It was his batting performances that eventually earned him opportunities to be the wicketkeeper for his country. Despite being seen as less technically sound behind the stumps than Jack Russell, his rival for England’s wicket keeping position, Stewart made 241 dismissals as a wicketkeeper at Test level. As an opening batsman for England Stewart made 15 tons and 45 half-centuries in Tests and four centuries and 28 half-centuries in the ODI format.

Having to wait his turn to represent Australia and eventually replace Adam Gilchrist was not easy but Brad Haddin was up to the task representing his country for seven years until his retirement at age 37 in 2015. Before Gilchrist announced his retirement Haddin had been the regular wicketkeeper for Australia A and filled in for Gilchrist during times of injury gaining his first tastes representing Australia in ODI format in 2001 and T20 in 2006. With Gilchrist retiring in 2008 Haddin was made a permanent member of the side and eventual Vice-Captain to Michael Clarke, which shows just how respected he was. In the last couple years of his career Haddin did show slumps in form but, ever the hard worker, made his way back into the Australian squad. At Test level Haddin has 270 dismissals and 181 in ODIs. As a middle-order batsman Haddin had a confident style, punching that ball around the field. He made four hundreds at Test level and 18 half-centuries. In ODIs he made two centuries and 16 half-centuries.

The task of keeping to the raw pace of the West Indies bowling attack in the 1980s was handled with great athleticism by Jeff Dujon. As batsmen were ducking for cover he was diving to recover deliveries. His decade long career behind the stumps for the West Indies began in 1981 in both Test and ODI formats, although his first class career was almost two decades long. Dujon made 270 dismissals as a wicketkeeper at Test level and 204 dismissals in the ODI format. A very capable lower-order batsman, Dujon notched five Test centuries and 16 half-centuries. He scored six half-centuries in the ODI format.

The big-hitting batsman with a very safe pair of gloves, Brendon McCullum is not only one of the most successful cricketers New Zealand has produced but also one of the most successful captains for his country. McCullum made his international debuts at Test, ODI and T20 for New Zealand in 2004, 2002 and 2005 respectively. He retired from representational duties in 2016. Despite stepping down from Test wicket keeping duties in 2010 and eventually ODI and T20 by 2013 due to a lower-back injury, McCullum is regarded as one of the best glove men the sport has seen. Especially effective in the shorter formats of the game, McCullum is ranked sixth internationally for the highest number of dismissals by a wicketkeeper in the ODI format with 242. His explosive batting displays in all forms of the game continued to earn McCullum his place in the New Zealand side once his wicket keeping days were behind him. He has 12 Test centuries to his name, including 145 against Australia in his farewell Test. McCullum has also hit five ODI and two T20 centuries. McCullum is currently the leading scorer in T20 internationals with 2,140 runs.

Famous for his moustache as much as his athleticism behind the stumps, Australian Rod Marsh was arguably the first to set the high batting standards required of the modern wicketkeepers. Making his test debut in 1970 and ODI debut in 1971, Marsh would go on to represent his country for the next 14 years behind the stumps. During his career, he would combine with Dennis Lillie to become the one-half of arguably the most successful bowler and wicketkeeper duo Australia has produced. Despite beginning his international career more than four decades ago, he holds the record for the fourth highest amount of dismissals by a wicketkeeper in Tests with 355. A reliable lower-order batsman Marsh scored three Test centuries and 16 half-centuries, as well as four ODI half-centuries.

Ian Healy, who looked up to Rod Marsh, was one of the new breed of wicketkeepers of the professional era that displayed considerable skill with the bat as well as the gloves, beginning the trend of wicketkeepers needing to be batsmen and wicketkeepers to earn higher representational honours. Healy was a key part of an Australian side that gradually worked its way to success, eventually becoming one of the great Test sides of all time. He made his international debut in 1988, retiring in 1999. On an international level, Healy is ranked third for the highest amount of dismissals in Test cricket at 395. In the ODI format there are 233 dismissals to his name. As a batsman he made four centuries and 22 half-centuries at Test level and four ODI half-centuries.

Before retiring from the game in 2012 after sustaining a career-ending eye injury from a bail, Mark Boucher was the backbone of the South African side. He debuted at Test and ODI level in 1997 and 1998, respectively, and quickly developed a reputation as a perfectionist, with a legendary work ethic at training. Boucher would eventually become known to teammates as ‘Guinness’ because of the numerous records throughout his career. He holds the record for the most dismissals by a wicketkeeper at international Test level with 555 dismissals and has the third highest number of dismissals by a wicketkeeper at international ODI level (424). Like many modern wicketkeepers, Boucher was a reliable batsman with a good strike rate and performed in high-pressure situations. He scored five Test centuries and 35 half-centuries. At ODI level he made one century and 26 half-centuries.

Mahendra Singh Dhoni is has a reputation as a calm captain who helped fill India’s silverware cupboard during his time at the helm. Not many would argue with the skill of Dhoni, as a leader and as wicketkeeper-batsman. Although not particularly elegant to watch, Dhoni was a finisher that got the job done for his team with spectacular individual performances. He made his international ODI debut in 2004, his Test debut in 2005 and T20 debut in 2006. At an international level Dhoni is ranked fifth, fourth and first for the highest amount of dismissals as a wicketkeeper at Test and ODI level respectively. In Tests he has 294 dismissals to his name and 398 in ODI matches. As a batsman Dhoni has been most successful playing in the ODI format with 10 centuries and 61 half-centuries, but has also contributed six tons and 33 half-centuries at Test level.

Arguably the best wicketkeeper-batsman to play the ODI format of the game, Kumar Sangakkara, has been a record breaking cricketer for his country Sri Lanka. He made his Test and ODI debuts in 2000 and T20 debt in 2006, retiring from all formats gradually between 2014 and 2015. In the ODI format Sangakkara is ranked first at an international level for the highest amount of dismissals with 482 from 404 matches. He also holds the record at an international level for the highest number of dismissals by stumping by a wicketkeeper with 99. Sangakkara is the second wicketkeeper behind Adam Gilchrist to take more than 50 wickets in World Cups.

Following the lead of the many wicketkeepers before him, Sangakkara was known for his witty sledging behind the stumps that kept batsman on their toes. As a top-order batsman the left-hander has broken records throughout his career across the three formats. He has 11 double centuries in Tests, only second to Don Bradman. He has the most runs by any wicketkeeper in ODI history with 13,262 runs.

Adam Gilchrist was the man behind the stumps during Australia’s golden age, keeping to names such as Warne and McGrath. But his efforts behind the stumps were sometimes overshadowed by his batting performances; particularly the left-hander’s attacking, big-hitting style in the shorter forms of the game. Gilchrist made his ODI debut in 1996 and Test debut in 1999. He was known being chirpy behind the stumps, ‘walking’ when believed he was out, and as Australia’s reliable Vice-Captain for much of his international career. With the emergence of T20 he made his debut in 2005 and would continue to play in the shortest form of the game in tournaments around the world after his retirement from representative cricket in 2008.

At an international level Gilchrist is ranked second at both Test and ODI level for the highest number of dismissals by a wicketkeeper with 416 and 470 respectively. While he did have slumps in form with the bat Gilchrist was had a high strike rate in all forms of the game, batting usually at seven for Tests and as an opener in the shorter forms of the game. At international level his batting strike rate for Tests was 81.95, 96.94 for ODI matches and 141.66 in T20s. At Test level he compiled 17 tons and 27 half-centuries and in the ODI format 16 hundreds and 55 half-centuries. Gilchrist was arguably cricket’s first star wicket-keeper batsman – one capable of winning games by himself –  and his all-round ability earns him the number one spot on our list.